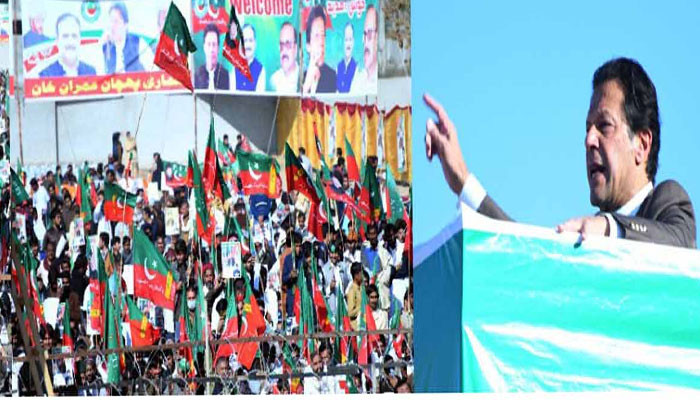 MIANWALI/ ISLAMABAD: Prime Minister Imran Khan on Saturday said he was ready for talks with everyone, but “there would never be any reconciliation” with those who “looted the nation’s wealth”.

Addressing a public meeting in Mianwali, he said his government was ready to talk to everyone including the dissident elements in Balochistan and tribal areas for peace, but not those who looted the public money.

“We are ready to talk to everyone who has a different ideology or whom we call the right or left. We are ready to resolve our issues with them peacefully, be they are in Balochistan or erstwhile tribal areas or Waziristan.

“Only the ones whom we will never make any reconciliation with are those who looted and laundered the Pakistani people’s money,” he reiterated.

“Every civilised society puts such people in jail; it does not reconcile with them,” he added.

PM Khan said those countries go poor where “big thieves” go scot-free and those who commit petty theft are thrown into jail.

Claiming that Pakistan was still the cheapest country in the region, Prime Minister Imran Khan assured people that prices of daily-use items would lower in three to four months.

The PM said the “biggest problem” in the world today is inflation, which rose due to the coronavirus pandemic. He said inflation is very much a concern throughout the world not just a phenomenon being witnessed in Pakistan.

The prime minister said that when lockdowns were imposed, “the US saw record high inflation”. “When global prices (of commodities) rose, unfortunately, Pakistan was impacted too,” he said, adding that the world as well as Pakistan continue to grapple with the issue.

Speaking of the government’s efforts to alleviate some of the problems faced by the people, the prime minister said that a 30pc discount on food supplies would be provided to those earning less than Rs50,000 a month.

In addition, the Kamyab Pakistan programme would provide interest-free loans to families for house building, a health card for the whole of Punjab by next March and Rs47 billion in higher education scholarships for 6.2 million students, he said.

The prime minister resolved that his government would base Pakistan on the two basic principles of the state of Madina — the rule of law and a welfare state.

He also assured the people of the water-deficient Mohar area that the government was considering the options of a canal as well as solar tube-wells for relief from electricity bills.

Apprising the gathering of Pakistan’s reshaped foreign policy, the prime minister said now Pakistan would turned into such a sovereign country which would never bow before anyone, and its people would make their decisions on their own.

He said that by the time his government completes its five years in power, there will be “historic” development in the city.

“The people of Mianwali stood by me when no one else did,” the premier said, adding: “I will repay this favour by serving them.”

Speaking of past rulers, the prime minister said that no previous government ever thought of development that is of benefit to the underprivileged sections of society.

“It’s my aim to bring greater development to the backward areas of Pakistan,” he said.

The premier said that his focus is on improving the standard of education and schools, and assured the people of Mianwali that they would not need to seek education outside the district in the future.

Meanwhile, Prime Minister Imran Khan Saturday reiterated that a deeper and stronger partnership with the US was mutually beneficial and critical for the region’s peace, security and prosperity.

He said this during a meeting with a four-member US Senate delegation comprising Senators Angus King, Richard Burr, John Cornyn and Benjamin Sasse here. All four senators are members of the Senate Select Committee on Intelligence, while Senator King is also member of the Senate Armed Services Committee.

Warmly welcoming the senators, the PM underlined that Pakistan valued its long-standing relationship with the US and was committed to expanding it in all spheres, particularly in the economic dimension. He hoped that the visit of US legislators’ delegations would help strengthen mutual understanding and forge closer people-to-people contacts.

With regard to the evolving situation in Afghanistan, the PM emphasised that Pakistan and the US must have deeper engagement to promote the shared objectives of peace, stability and economic development. He particularly underscored the urgent need to support the Afghan people by taking all possible measures to prevent a humanitarian crisis and economic collapse. The premier also highlighted the importance of closer cooperation to address the security threats in the region, including terrorism.

Apprising the delegation of the continuation of egregious human rights violations in the Indian Illegally Occupied Jammu and Kashmir (IIOJK), the PM underscored that the extremist and exclusionist policies of the RSS-inspired BJP were posing a threat to regional peace and security. He stressed that the US must play its role in the maintenance of peace and stability in the region.

The PM underscored that for its part, Pakistan remained ready to pursue measures that would reinforce peace, stability and prosperity in the region, if the enabling environment was created by India.

Recalling collective struggles of Pakistan and the US over decades in promoting peace and security globally, the senators deeply appreciated Pakistan’s recent contribution to evacuation of the American nationals and others from Afghanistan post-15 August.

The senators reaffirmed their commitment to a stable and broad-based Pakistan-US bilateral relationship. They emphasised that, given the size of Pakistan’s population as well as its geo-strategic location, the US and Pakistan should make determined efforts to promote trade, investment and economic cooperation.