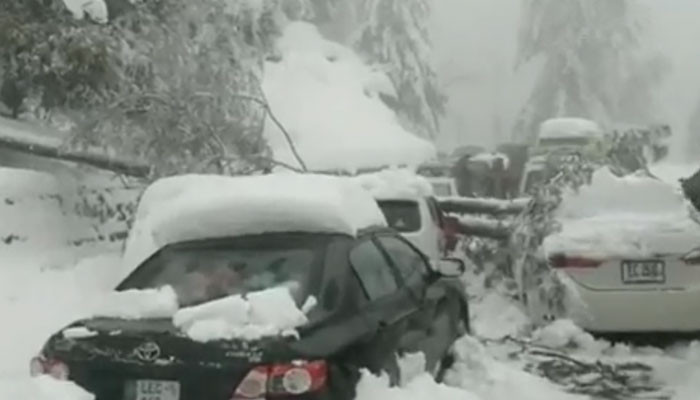 ISLAMABAD: A major reason behind the tragic incident of Murree, in which over 20 tourists lost their lives, was reportedly the Punjab government’s non-compliance with the standard operating procedures (SOPs) framed to ensure the flow of traffic and snow clearance during the winter season, as per a report published by The News on Sunday.

A copy of the nine-page SOPs, issued during the last government, envisages a comprehensive joint action plan of all departments concerned with detailed mechanisms to ensure snow clearance and smooth flow of traffic in this important hill resort of the country.

Sources in the bureaucracy said that every year before the winter season, former Punjab Chief Minister Shehbaz Sharif used to hold a meeting with all these departments in Murree to manage traffic and clear snow during winters. Commissioners and deputy commissioners used to be assigned to ensure the implementation of the SOPs with a regular monitoring mechanism in place in Lahore, the publication reported, adding that special funds also used to be allocated to C&W and highway departments, in particular.

According to the SOPs issued for 2014, different departments were assigned different tasks of their respective domain covering all possible aspects. The SOPs specifically name 30 major roads, which were earmarked for priority snow clearance by the provincial highways machinery division, Murree.

These SOPs assigned the TMA Murree to establish the main Tehsil Control Room, which would have round-the-clock representatives of all departments. Thirteen different tasks were assigned to the TMA in these SOPs.

The Provincial Highway Department Machinery Division was also tasked to establish a control room for any emergency and coordination with allied departments to be manned round the clock.

These SOPs say that there would be two main snow camps: one in Sunny Bank and the other in Jhika Gali. In addition, there are to be 12 sub-camps for snow clearance operation for all different areas of the hill station.

The SOPs said that 10 vehicles will be deployed to sprinkle salt. The SOPs say that before the start of the snowfall, the Highways machinery would be placed at the following points for prompt snow clearance- Jhika Gali Chowk, Kuldana Chowk, GPO Chowk, Bansra Gali and Sunny Bank Camp. The SDO Highway Machinery was tasked to arrange 4×4 jeeps for the sprinkling of salt.