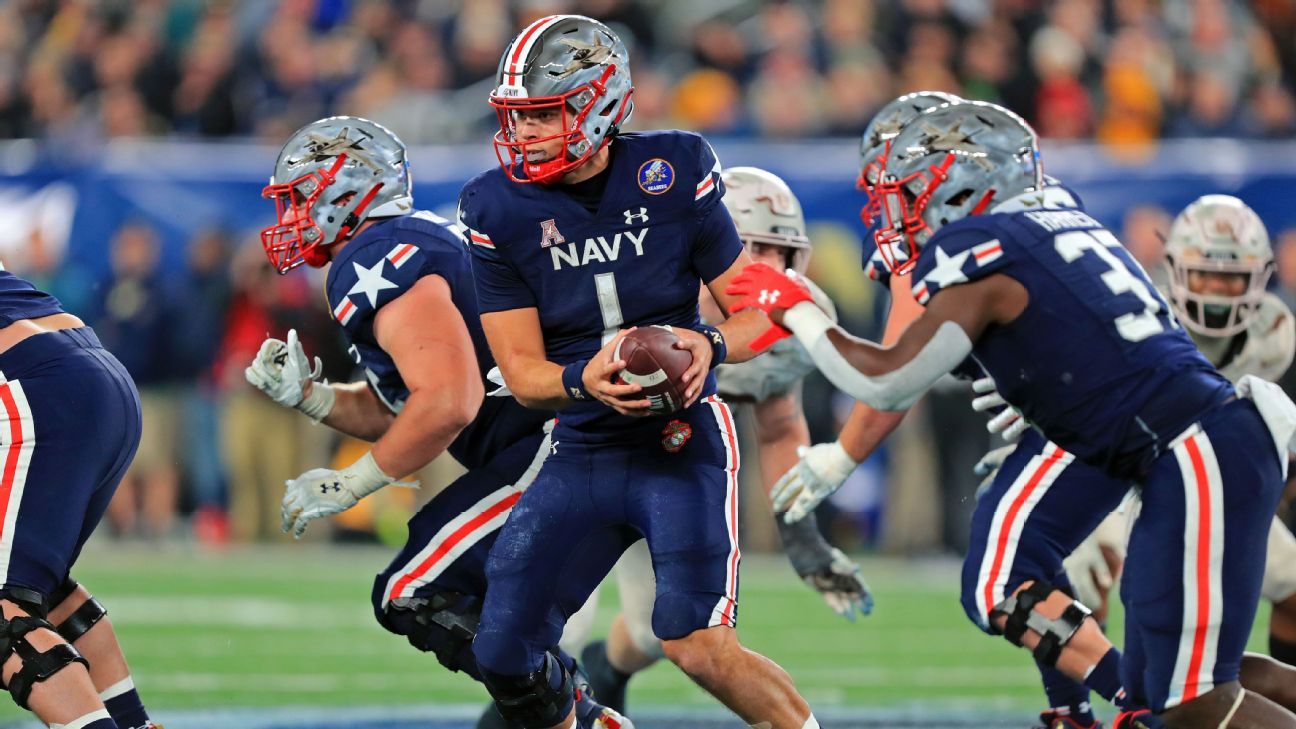 Singled out on a Saturday, with a remarkable streak in play, Army-Navy will go down as one of the most heavily bet regular-season college football games ever at U.S. sportsbooks, with tens of millions of dollars at stake across the nation.

• More bets were placed on Army-Navy at Caesars Sportsbook than were placed on any other regular-season college football game except one: Ohio State-Michigan.

• More money was riding on Army-Navy than any other event on a Saturday featuring a full slate of NBA, NHL and college basketball games and a UFC card.

• At some sportsbooks, Army-Navy attracted more money than the majority of Sunday’s NFL games. And, get this: Army-Navy wasn’t even on the board in the largest betting market in the U.S. New Jersey prohibits sportsbooks from taking bets on collegiate events that take place in the state. The game was played at MetLife Stadium in East Rutherford, New Jersey.

There were plenty of big bets in other spots, though. Jason Scott, vice president of trading for BetMGM, said the amount bet on Army-Navy was greater than what’s bet on an average non-prime-time NFL game. A large chunk of the money bet on this year’s game, Scott said, came from five high-rollers, who combined to bet $1 million on Army-Navy.

The Midshipmen upset the Black Knights as 7-point underdogs in a 17-13 win.

Much of the intrigue surrounding the game for bettors was the over/under total, which closed at 35.5, tied with Iowa-Wisconsin for the lowest of the season. It was the 16th straight Army-Navy game that stayed under the total, much to the delight of a bettor at Caesars Palace, who put $135,000 on under 35.5 for the game and $150,000 on under 16 in the second half.

The books did well on Navy’s outright upset, but Sunday was a different story.

• NFL favorites won 10 of 11 games straight up and went 9-2 against the spread Sunday.

The rush of favorites left sportsbooks needing the Bears to stand up to Aaron Rodgers and the Packers in the prime-time game to avoid one of their costliest Sundays of the season.

“Everything the public and the sharps backed turned to gold today,” Craig Mucklow, director of trading for Caesars Sportsbook, told ESPN ahead of the Sunday night game, adding that if the Green Bay covered the spread against the Bears, the book would suffer its worst Sunday of the NFL season.

• As the late-afternoon games were winding down, Jeff Stoneback, director of BetMGM sportsbooks in Nevada, summed up the day like this: “It’s not going to be good, but it could get really ugly.”

A couple of hours later, after the 49ers and Buccaneers each covered the spread with touchdowns in overtime, Stoneback wrote in an email, “We hit ugly. One of the worst days of the year.”

• Multiple sportsbooks said they came out ahead on only one game Sunday afternoon: the Ravens covering as 3-point underdogs in a 24-22 loss to the Browns. Cleveland led 24-3 early in the third quarter, but the Ravens, who lost quarterback Lamar Jackson to injury in the first half, scored the game’s final 19 points, capped by a Mark Andrews touchdown reception with 1:17 remaining.

“We had no business covering that game,” Murray of the SuperBook said, noting that some big bets on the Browns came in late Sunday morning at their operation at The Lodge Casino in Colorado. “We sure looked dead after Lamar Jackson went out. I can’t believe the Ravens covered that game. We’ll take it. That was the only side we were pulling for all day that actually got the money for us.”

The Atlanta Falcons were the only other underdog to cover in the afternoon. The Falcons covered the spread in a 29-21 win over the Panthers, the only outright upset on Sunday.

Murray said the only reason Sunday wasn’t the worst of the season for the SuperBook was overall volume is typically lower at this point in the season. “If we had a Sunday in which the favorites 10-2 or 9-3 in Weeks 1 or 2, then the lights would be going out,” Murray joked. “Well, not really.”

• A bettor on Saturday morning at the Borgata Sportsbook in Atlantic City, New Jersey, placed a $73,500 bet on the Buccaneers to win the NFC South at -10,000 odds for a chance at a $735 net profit. Thomas Gable, sportsbook director for the Borgata, said they see high-dollar bets on giant favorites from multiple customers.

“I know some people automatically jump to the conclusion that a person is laundering money when they hear about this type of wager, but, believe me, there are enough compliance checks and signs when someone is actually attempting to do something like that,” Gable told ESPN.

The Buccaneers have a four-game lead with four games remaining in the AFC South. They host the Saints next week and close out the season with the Jets and the Panthers twice. It seems likely that Tampa Bay is going to win the division, potentially producing a 1% return in just over a month.

“Honestly, I don’t know if people think they can get more of a return than if they had it in a bank account that was accruing interest,” Gable said. “Outside of a bank account, most other investment vehicles carry some sort of risk, so I’m not sure if they look at these wagers as having less risk or what.”

• The line on the Dallas-Washington game moved sharply Sunday morning. The Cowboys went from -4.5 to -6.5 in the hours leading up to kickoff.

In New Jersey, sharp money on the Cowboys showed up at the SuperBook on Sunday morning. In Las Vegas, Chris Bennett, sportsbook manager at Circa Sports, said bettors who like to watch for odds movement at influential offshore sportsbooks and wager accordingly took Dallas at -4.5, -5.5 and -6, but added that one of his sharpest customers took the Football Team at +6.5.

“That was our worst game of the day,” Stoneback of BetMGM said. “It was a combination of the public and sharp money.”

• On Sunday morning at Caesars Sportsbook, 10 of the day’s 13 games had attracted more bets on the under than over. Overs went 9-3-1.

• The point spread on the Monday Night Football game between the Arizona Cardinals and Los Angeles Rams was shrinking entering game day. The Cardinals, who opened as consensus 3-point favorites, were laying only two late Sunday.

What were the odds?