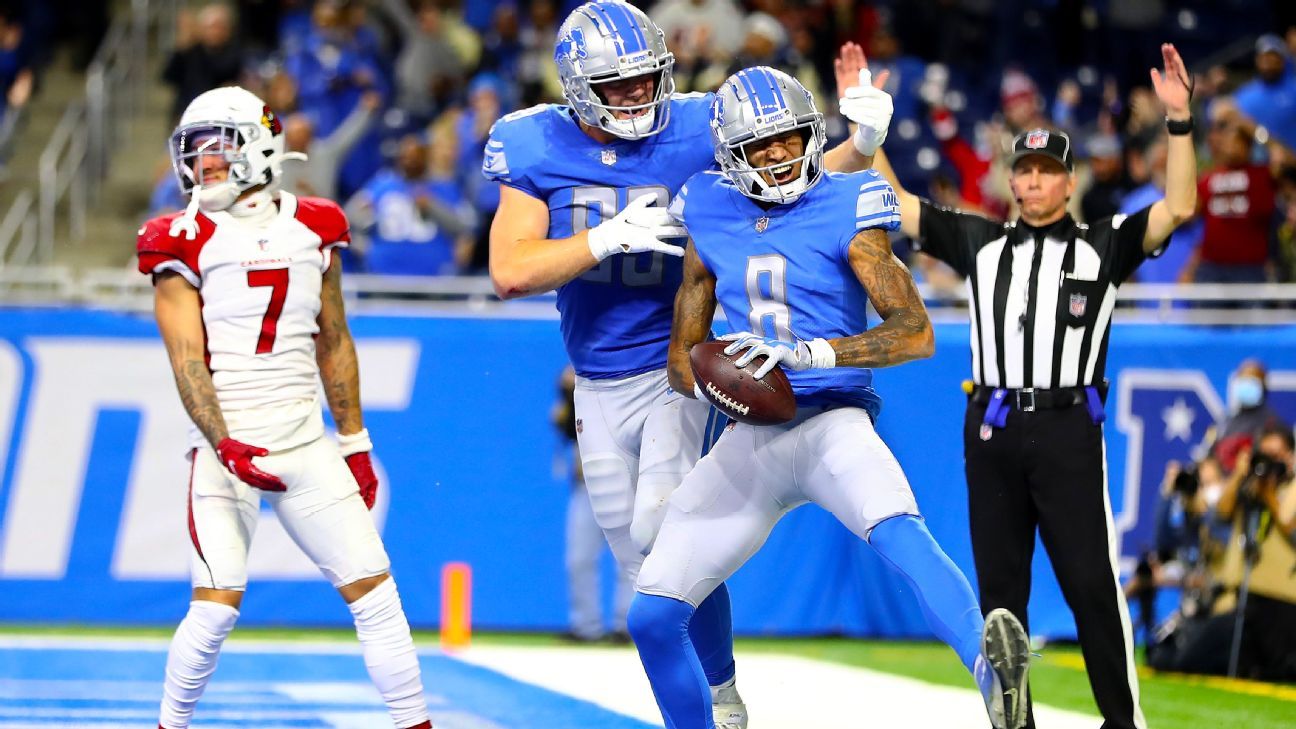 A bettor in Nevada woke up Sunday morning and decided to put $100,000 on the Detroit Lions — not to cover the 13-point spread, but to beat the Arizona Cardinals straight up.

How’d you start your day?

The Lions stunned the Cardinals 30-12, pulling off the second-biggest upset of the season, point spread-wise. And only a very few saw it coming.

At sportsbook PointsBet, more money was bet on the Cardinals to beat the Lions than was bet on any other team, point spread or money line. Overall, 95% of the money-line bets were on Arizona.

The action was similar at most sportsbooks, with both DraftKings and FanDuel reporting lopsided action on the Cardinals and minimal interest on the Lions. But bookmakers for Caesars Sportsbook had a different experience.

“Ballsy call,” Craig Mucklow, director of trading for Caesars Sportsbook, told ESPN. “How can you get upset with bets like that? Hats off; seriously impressive bet.”

Detroit became the fourth double-digit home underdog to win outright this season, the most in a single season since 1995.

• Scott Shelton, senior trader for BetMGM, saw his boss in passing as he showed for the late shift Sunday afternoon at Mandalay Bay.

“He said we won every single game [in the early slate],” Shelton said.

Indeed, despite all the uncertainty and the lighter slate, sportsbooks cleaned up this week after suffering one of their worst Sundays of the season last week.

• The largest reported bets by BetMGM:

• The only team that attracted more money-line bets than Arizona at PointsBet was Tampa Bay. The Buccaneers lost 9-0 as 11.5-point favorites to the Saints.

The SuperBook offered a no-touchdown-scored prop in the Sunday night game between the Saints and Bucs at 200-1. The book took three bets, two $5 bets and one $2.

• With the Lions and Saints each winning as big underdogs, it was only the third time in the past 40 seasons that two underdogs of at least 11.5 points won in the same week.

• The day wasn’t quite as rosy for the SuperBook, which suffered a “pretty big hit on the Titans-Steelers game.”

“We booked it to need the Titans after seeing some sharp money come in on them,” John Murray, executive director for the SuperBook, said. “We were already heavy to that side when we had a VIP player at The Lodge Casino in Colorado take Steelers on Sunday morning.”

• Four games remain, with back-to-back doubleheaders Monday and Tuesday that were caused by the spike in COVID-19 cases in the NFL. Players, including starting quarterbacks, have been going on and off the reserve/COVID-19 lists for days.

The Browns went from 5-point favorites over the Raiders to 3.5-point underdogs and back to favorites in their home game against Las Vegas that was rescheduled to Monday due to COVID-19 issues with Cleveland.

“We’ll be big Raiders fans on Monday,” Murray said. “We booked to need the Raiders when we heard that [Baker] Mayfield and [Case] Keenum were both out with COVID. And then they moved the game to Monday.”

“I think the postponements will actually help betting handle,” Murray added. “The Raiders-Browns game was going to be big either way because it was always going to be a standalone game, but the Redskins-Eagles game and Seahawks-Rams game will both get a boost by being on Tuesday instead of being lost in the deck on a Sunday.”

This week, Davidow breaks down how Deck Prism viewed the three fourth-down decisions by Chargers coach Brandon Staley in Thursday’s loss to the Chiefs:

“We are going to see a pattern here,” Davidow said.

• Fourth-and-1 from the Chiefs’ 33-yard line with 6:18 left in second quarter: Chargers, trailing 10-7, elect to go for it and pick up the first down on a Justin Herbert 2-yard scramble.

• Fourth-and-1 from the Chiefs’ 2-yard line with two seconds left in the second quarter: Leading 14-10, Chargers elect to go for it and fail.

“Basically, nothing was close for the Chargers, and they chose correctly every time,” Davidow said. “The only actual fourth-down strategic mistake of the game was Kansas City not going for it from fourth-and-7 from the Chargers’ 11-yard line early in the second quarter. They clearly should have gone for it.”

What were the odds?

• -270: Jake Paul, a -270 favorite, knocked out former UFC champion Tyron Woodley in the sixth round of Saturday’s rematch in Tampa, Florida.

The fight had significant betting interest. In fact, the only boxing match that attracted more money from bettors this year than Saturday’s fight was the heavyweight title bout between Tyson Fury and Deontay Wilder.

• 500-1: Entering the season, the Cleveland Cavaliers were 500-1 to win the NBA title at BetMGM. Two months later, the Cavs have the third-best record in the Eastern Conference and are 100-1 to win the title.