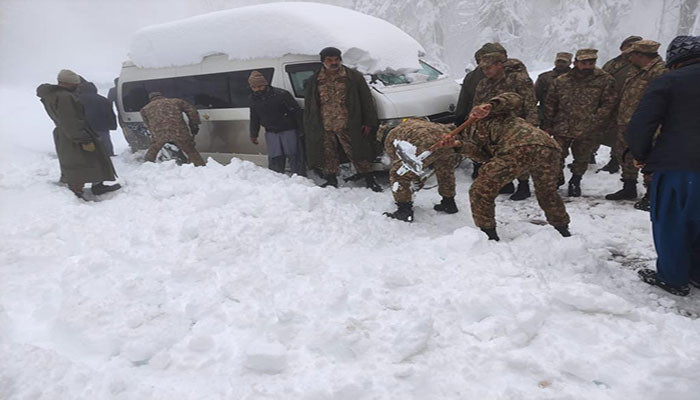 ISLAMABAD: The opposition leaders Saturday severely criticised the Pakistan Tehreek-e-Insaf government over the Murree tragedy in which at least 22 people died after their vehicles were stuck in snowstorm on various roads.

Pakistan Muslim League Nawaz (PMLN) President and National Assembly Opposition Leader Shehbaz Sharif said the death of dozens of tourists in Murree was mass murder by incompetence of the government, and not just an unfortunate incident.

“When the government knew that people were trapped in severe cold, why no effort was made to rescue them and take them to safe shelters? “If the government is not capable of managing even a traffic situation, what right does it have to stay in power and why?

“If tourists were going in such large numbers, why were advance arrangements not made? Was the administration asleep? How can a government that can’t save its citizens trapped in a traffic jam, get the people out of the quagmire of inflation and deal with the big and serious problems of the country,” he questioned.

The PMLN president said Imran Niazi had no moral courage. He said at least the ministers and their subordinates responsible for the criminal negligence should be dismissed. If no one would be held responsible for the calamity, the government’s criminal silence over the deaths of the people was tantamount to a heinous sin, he lambasted.

He said those were not just accidental deaths, but deliberate killing of civilians. Those who quote examples of the West could not even keep the honour of the Eastern traditions.

The NA opposition leader cancelled his Karachi visit in the wake of the Murree tragedy. Shehbaz extended his heartfelt sympathies and condolences to the bereaved families.

PMLN Vice-President Maryam Nawaz said the government was not only responsible for counting the number of tourists, but it also has to make necessary arrangements for them as well. “The person who mocked Shehbaz Sharif’s boots and service is sitting in his palace trying to save his failing government […] government negligence is behind the deaths, not snowfall.”

The PMLN leader also prayed for the forgiveness of the deceased.

Separately, Pakistan People’s Party Chairman Bilawal Bhutto-Zardari says tourists should have been informed about the Murree weather situation. He said the entire nation was saddened over the unfortunate incident in Murree, as he, too, expressed sorrow over the deaths of people.

Also, Parliamentary Leader of the PPP in the Senate Sherry Rehman demanded an inquiry into the “criminal negligence” on the part of the authorities. “My deepest condolences to the families and loved-ones of the departed souls. This was an avoidable incident and this level of chaos could have been prevented if appropriate weather warnings had been issued by the government. Had there been adequate assistance for the local authorities during the snowstorm, the tragedy could have been averted,” she said in a statement.