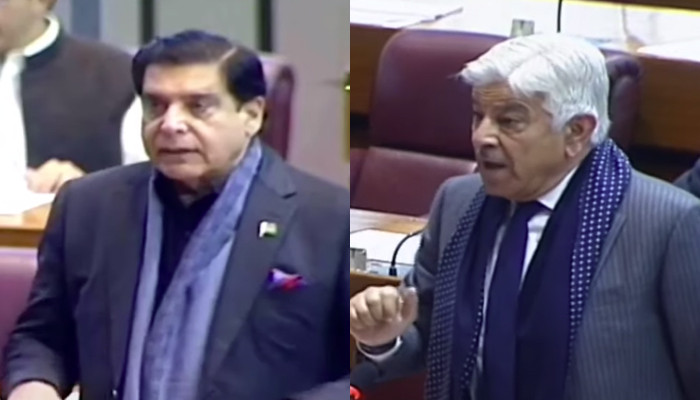 ISLAMABAD: Opposition lawmakers Wednesday in the National Assembly staged a strong protest against the government’s bid to legislate on the State Bank of Pakistan (SBP) Amendment Bill and the Tax Laws (Fourth) Amendment Bill.

The federal cabinet on Tuesday approved the SBP bill, which has proposed to curtail the government’s borrowing from the central bank, while the tax bill has been deferred.

PML-N leader Khawaja Asif, speaking during the NA session, asked the government to be empathetic and not legislate on the bills as they would have adverse effects on the country’s economy.

For his part, PPP leader and former prime minister Raja Pervaiz Ashraf asked the Opposition benches to join hands and stop the government from legislating on the bills.

“I’ve heard that someone is planning on tabling a mini-budget. This will increase the woes of the people who are already under pressure due to rising inflation, unemployment, and gas crisis,” he said.

Responding to the Opposition lawmakers, Foreign Minister Shah Mahmood Qureshi said it was crucial to analyse the factors behind Pakistan’s economic woes.

As FM Qureshi addressed the Lower House of the Parliament, the Opposition lawmakers pointed out that the quorum was incomplete. However, after Deputy Speaker Qasim Suri counted the members, and they were enough to continue the session.

Moving on with his speech, the foreign minister said assured the house that the government was responsible for the country’s economic sovereignty — and it would take necessary steps for it.

Meanwhile, Minister for Interior Sheikh Rasheed said whether the mini-budget is tabled in the Parliament on January 12 or 15, there would be no dire consequences — it will sail smoothly.

The federal cabinet’s approval of the SBP Amendment Bill is a part of a prior action on the government’s end to fulfil International Monetary Fund’s (IMF) conditions ahead of the sixth review of the Extended Fund Facility by the IMF’s executive board.

The SBP Amendment Bill suggested extending the SBP governor’s tenure from three to five years, divided into two terms. However, it is yet to be decided if it becomes applicable for the incumbent SBP governor or not.

Meanwhile, another bill, the Tax Laws (Fourth) Amendment Bill, slated to be presented before the Cabinet, was deferred. The main reason behind the deferral was the resistance from the PTI-led regime’s allies who insisted the government take them into confidence.

The government deferred the Tax Law (Fourth) Amendment Bill, but two federal ministers confirmed to The News that the bill would be approved by the special cabinet committee within the next 48 hours either on Wednesday or Thursday.