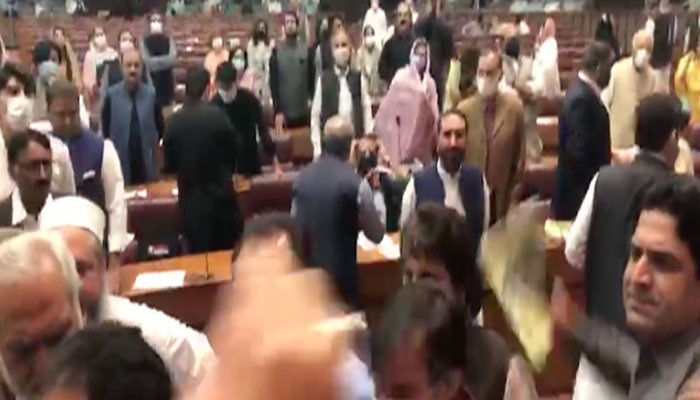 ISLAMABAD: The government on Thursday introduced the Finance (Supplementary) Bill, 2021 and the State Bank of Pakistan (Amendment) Bill, 2021 in the National Assembly amid strong protest and rejection by the opposition members and physical brawl between parliamentarians from the two divides of the House.

The speaker also pointed out as rules allow, there will not be need to refer the Finance (Supplementary) Bill, 2021 to the relevant standing committee of the House. However, he assured that he would allow debate on the bill.

As the opposition members were staging protest in front of Speaker’s dais, two female members – Shagufta Jumani of the PPP and Ghazala Saifi from the Pakistan Tehrik-e-Insaf (PTI) – came to blows and exchange slaps. The PPP parliamentarian twisted hand of Ghazala Saifi and pushed her.

The PTI member, who left the National Assembly hall during proceedings, told the media that a finger of her right hand was fractured. “Finger is swollen and doctor says it is fractured,” she said adding that the opposition member also slapped her.

Shagufta Jumani claimed that first the PTI member slapped her and she had the right to respond. However, in a video, the PPP member was seen slapping the opposition member while holding her with the other hand. The information minister was seen busy in making video of the scuffle which occurred in front of his seat instead of attempting to separate two female parliamentarians.

In the meanwhile, the opposition members including Naveed Qamar, Kesoo Mal Kheeal Das and Marriyum Aurangzeb surrounded Minister for Finance Shaukat Tarin and Minister for Human Rights and started arguing with them.

The opposition leader, Shehbaz Sharif, Asif Ali Zardari and Bilawal Bhutto Zardari, did not turn up at Thursday’s proceedings.

Taking the floor, PMLN parliamentary leader Khwaja Muhammad Asif said the government was compromising financial sovereignty of the country. “This day is day of infamy for the chair and the House. The whole nation will be ashamed of such an action of the Parliament as to what it is doing,” he said.

Kh Asif said the act of extending ordinances, which had already been expired, for another 120 days, was also against the Constitution. “You are handing over State Bank to the IMF and putting burden more taxes on people,” he said. He challenged that the chair could not allow extension in period of ordinances even for a single or for two years. “As per Article 89 of the Constitution and decision of the Supreme Court, you cannot extend ordinances which have been expired,” he said.

Addressing Speaker Asad Qaisar, the PMLN leader said he was also common citizen and member of the House. “Have mercy on common man and do not sell out the country and put burden of taxes on them,” he said.

Kh Asif questioned whether it was East India Company which was placing the country under the IMF and other international financial institutions.

He said the chair should be ashamed of allowing extension of ordinances which have been expired and selling out country to the IMF. He said every constituency of Khyber-Pakhtunkhwa during the local-government elections was witness to the fact that the rulers spent last three years in loot and plunder of the country.

Responding to speech of the opposition member, the minister for planning and development Asad Umar said those were talking about national sovereignty who exchanged gifts with Indian Prime Minister Modi and whose former prime minister and defence minister had Iqama of different countries.

The minister said Kh Asif was talking about KP local government results whereas the PMLN, ANP and PPP collectively won nine tehsil seats while PTI alone secured 15 seats. He observed that the PMLN should be ashamed of talking about Pakistan’s surrender while speaking on floor of the National Assembly.

Former prime minister Raja Pervaiz Ashraf said the chair was not adding to dignity of the House while allowing bulldozing legislative business and extension of lapsed ordinances. He regretted that the minister for planning and development could not satisfy the House and respond to points raised by PMLN leader Kh Asif with regard to legislation and extension. “The government members and ministers lack parliamentary wisdom and they start reading what they are asked,” he said.

The PPP leader said the government had failed on every front and wasted the last three-and-a-half years in levelling allegations and humiliating poor masses.

He said the government, while getting unconstitutional work done by the speaker, wanted to humiliate the chair and they want the opposition to use abusive language for Imran Khan and that is why they abuse Nawaz Sharif and Asif Zardari.

Pervaiz Ashraf said the PTI leadership should see writing on the wall when they will face 220 million in the polls. “I call upon you withdraw whole proceedings of the House of the day,” he said.

JUIF Parliamentary leader Asad Mahmood, while raising serious questions on the role of the Speaker, said under what compulsions he was trying to make proceedings controversial. He said a ruling of the Speaker regarding extension of lapsed ordinances was against the Constitution. He asked the minister for planning and development why he was removed from portfolio of finance if financial policies of the last governments were wrong.

Interrupting the JUIF leader, the Speaker said what he did was according to Constitution, rules and procedure. However, Asad Mahmood said there were speakers in the past who are remembered in good or bad names. He alleged that the PTI leaders attempted to purchase votes of people during the local government elections but the KP province rejected the PTI regime’s policies.

Adviser to the Prime Minister on Parliamentary Affairs Babar Awan said the ordinances were already submitted in the National Assembly; therefore, there was no question of expiry of the same.