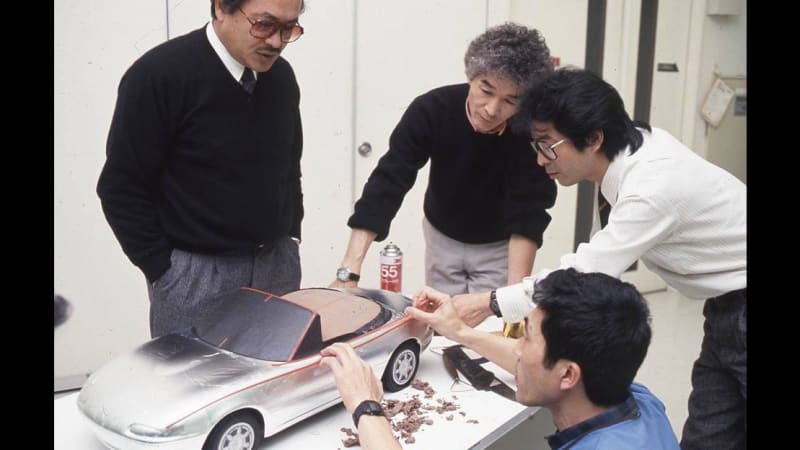 An American, Bob Hall, is credited as the man who took the idea of a British-style two-seat roadster to Mazda and worked on the project for years in order to convince Mazda to follow through and put the car into production. Japanese designer Shunji Tanaka (far left, above) is credited as leading the exterior and interior design of the NA Mazda MX-5 Miata that has launched car lovers’ dreams and racing careers for the past 33 years. Tanaka died earlier this month, a Facebook post by a close friend saying, “I’m so sorry to announce that Mr. Tanaka, the Chief Designer of NA MX-5 has passed away on Dec. 12th at the age of 75.” The post says Tanaka’s last words were, “I have no regret in my life.” If that last part is true, it is justified. After doing work on Mazdas like the Miata and Mazda 929, Kawasaki poached Tanaka to design motorcycles. There, he added two-wheelers like the Z1000, ZX6R, ZX10R, and Z750 to his resume.

It might not be service to mankind, but his service to enthusiasts is unquestioned. The Miata not only initiated a roadster rebirth and Mazda’s adoption of the Jinba Ittai philosophy, it has outlasted almost all of its roadster disciples, and outsold every single one, with more than a million leaving dealer lots since the first gen debuted. Frankly, Jinbai Ittai is a better tagline than “Swinging Time Machine,” which was Tanaka’s phrase to describe “a symbol of freedom achieved through a connection between the driver and the environment.” Engineers Toshihiko Hirai and Takao Kijima must be noted here as giving the Miata the dynamic, gymnastic handling and balance that put real substance behind the droptop’s absurdly cute looks. But 17 years before twin Miatas Mia and Tia hit the big screen in the first Cars movie, here were the real-life looks that art would later imitate.

The first design sketches for the MX-5 came from the automaker’s U.S. R&D arm, which consisted of a tiny number of people in the early 1980s when the project commenced. As is often the case with such emotional projects, Bob Hall and company were given few resources because plenty of execs at the mothership in Japan didn’t believe in the product, and even many of those who did felt the car should be a front-driver or have its engine in the middle. The first clay that came from the U.S. studio were based partly on larger, wider RX-7 running gear. The story goes that when Tanaka saw the American design, he believed it too heavy-looking and, well, American. The roots of what we eventually got were in the early designs, but Tanaka felt they didn’t communicate enough that this was a lightweight sports car.

We don’t know who or how many people Tanaka upset in the process, though, because he’s practically been erased from the Miata annals. Mazda hasn’t said a word, and two lengthy pieces detailing Hall’s source as the project’s creator, one from 2017 and one from 2019, don’t mention Tanaka once. Ah well. We know, and we tip our hat.