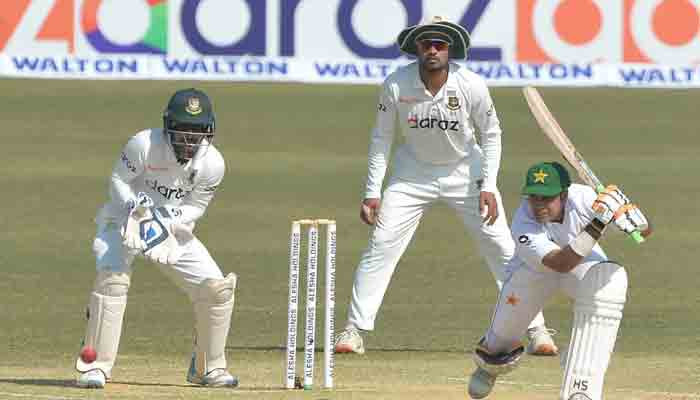 CHITTAGONG: Abid Ali fell just shy of back-to-back centuries as Pakistan cruised to an eight-wicket win over Bangladesh in the first Test in Chittagong on Tuesday.

Ali’s 151-run stand with fellow opener Abdullah Shafique helped bring play to an end before lunch on the final day, beating their first-innings partnership by five.

Bangladesh had to wait until the 10th over of the day for their first success when Mehidy Hasan trapped debutant Shafique lbw on 73 with a fuller delivery.

Shafique, who also scored a fifty in the first innings, fell after hitting eight fours and a six.

Ali, who made 133 in Pakistan’s first innings, looked poised to become first Pakistani to a make a Test century pair in six years, after Misbah-ul-Haq achieved the feat against Australia in 2014.

But Taijul Islam hit him in front of the middle stump with a straighter delivery, with Pakistan just 31 runs from victory.

“Our thought process was to stay at the wicket and put up a partnership. I have been playing domestic cricket and performing well. That’s what I carried into this game,” said man of the match Ali.

He left the crease to a standing ovation and was also congratulated by Bangladeshi fielders on a splendid 148-ball innings that saw 12 boundaries.

Azhar Ali, 24 not out, finished the game at over 58.3 after back-to-back boundaries off Mehidy, with skipper Babar Azam unbeaten on 13 at the other end.

“Our fast bowlers performed well but we need to improve,” he said.

“The way Abdullah [Shafique] played is commendable,” Babar Azam said and appreciated Abid Ali for providing a solid opening stand in both the innings.

“We came back well… and that’s what Test cricket is all about,” he added.

Taijul finished the game with eight wickets for the hosts, which included 7-116 in the first innings.

“We lost in the first hour in the first innings and second innings as well, but credit to them, especially Afridi and Hasan Ali. They bowled really well,” said Bangladesh captain Mominul Haque.

The hosts scored 330 runs in the first innings and took a 44-run lead after bowling out Pakistan.

Bangladesh wicketkeeper-batsman Liton Das made 114 runs in the first innings and top-scored in the next with 59.

Hasan Ali and Shaheen Afridi shone with the ball for Pakistan, claiming 5-51 and 5-32 respectively in two innings.

The second Test will be played at Dhaka’s Sher-e-Bangla National Stadium from December 4-8.