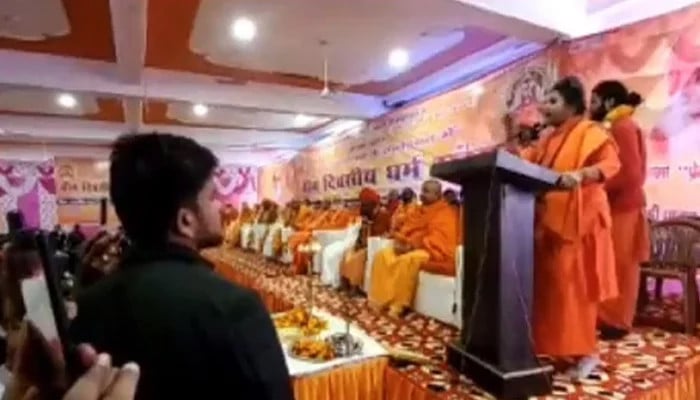 To express Pakistan’s serious concerns over the calls for Muslim genocide, the Indian Charge d’ Affaires was summoned to the Ministry of Foreign Affairs, Islamabad.

In a statement, the Foreign Office said it was highly reprehensible that Hindu Raksha Sena’s Prabodhanand Giri and other Hindutva figures who called for ethnic cleansing of Muslims have neither expressed any regret nor has the Indian government condemned or taken any action against them so far.

“The violent hate speeches were made during the “Dharma Sansad” held at Haridwar, Uttarakhand, from December 17-19, 2021,” the statement said.

The Foreign Office told the Indian envoy that the hate speeches have been viewed with grave concern by civil society and the cross-section of the people of Pakistan and around the world.

Regrettably, the toxic narrative against minorities, particularly Muslims, and their persecution understate patronage has become a norm under the current Hindutva-driven BJP-RSS combined government in India, the Foreign Office said.

The Indian side was reminded that such incitement to violence by Hindutva figures including the ruling party’s elected members also preceded the anti-Muslim riots in New Delhi in February 2020.

“The continued grave violations of human rights of minorities, especially Muslims and their places of worship, anti-Muslim legislation by the Union Government of India and several BJP-ruled states, and continued incidents of violence against Muslims on flimsy pretexts by Hindutva groups with complete impunity and often under state patronage highlight the worsening trend of Islamophobia and present a grim picture about the fate of Muslims in India,” the statement said.

Pakistan called on the international community including the United Nations, Organisation of Islamic Cooperation (OIC), and relevant human rights organisations to hold India accountable for its gross and systematic human rights violations against minorities and take immediate measures to save them from impending genocide, the statement said.

“India is expected to investigate these hate speeches and incidents of widespread violence against minorities, particularly Muslims and their houses of worship, and take measures to stop such incidents from recurring in future,” the statement said.

Indian police said last week they have launched an investigation into an event where Hindu hardliners called for mass killings of minority Muslims.

A speaker at the gathering earlier this month told the crowd that people should not worry about going to jail for killing Muslims, according to a video.

“Even if just a hundred of us become soldiers and kill two million of them, we will be victorious… If you stand with this attitude only then will you be able to protect sanatana dharma (an absolute form of Hinduism),” the woman said.

The meeting in the northern holy city of Haridwar was attended by at least one member of Prime Minister Narendra Modi’s BJP.

The party stands accused of encouraging the persecution of Muslims and other minorities by hardline Hindu nationalists since coming to power in 2014.

Prominent Muslim MP Asaduddin Owaisi tweeted that the comments in the video were a “clear case of incitement to genocide”.

Modi’s government has not commented on the event.

The woman in the video reportedly added that Indians should “pray to Nathuram Godse”, the Hindu extremist who assassinated Indian independence icon Mahatma Gandhi in 1948.

Another delegate, Prabodhanand Giri — the head of a fringe Hindu group who is often photographed with senior BJP members — called for a “cleansing” and for those present to be “ready to die or kill”.

“Like Myanmar, the police, politicians, the army, and every Hindu in India must pick up weapons and do this cleansing. There is no other option left,” he is heard to say.

A military crackdown in Myanmar on the heavily persecuted Muslim Rohingya minority is thought to have killed thousands and has forced huge numbers to flee.

A third speaker is heard to say that he wished he had killed Modi’s predecessor, the main opposition Congress party’s Manmohan Singh, who was the first Sikh Prime minister of India.

Another said he had asked hotels from his state not to allow Christmas celebrations. The statement was met with cheers from the audience.

The BJP denies accusations that its agenda is to turn officially secular and pluralistic India into a purely Hindu nation.

Many in the Muslim community say they have been increasingly subject to attacks and threats since Modi, a lifelong member of a hardline group, came to power.

Christians have also been subject to violence and harassment, with the BJP government in the southern state of Karnataka this week becoming the latest to introduce legislation outlawing “forceful” religious conversions.

Police in Uttarakhand state, where the controversial gathering took place, told AFP they are “investigating the matter and strict action will be taken against the guilty.”

Michael Kugelman from the Wilson Center hit out at the Indian government over its silence.

“…not a peep, much less a condemnation, from the gov’t. Sad truth is that this deafening silence isn’t the least bit surprising,” he tweeted Thursday.