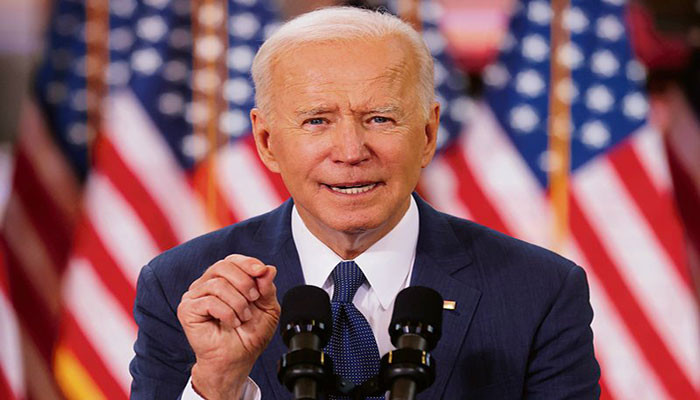 ISLAMABAD: Pakistan has declined to participate in the Summit for Democracy, which is being held virtually on Dec 9-10, and to be hosted by US President Joe Biden.

“We are thankful to the United States for inviting Pakistan for participation in the Summit for Democracy. We remain in contact with the US on a range of issues and believe that we can engage on this subject at an opportune time in the future”, said the Foreign Office, while diplomatically declining the invite.

Washington, however, was told that Pakistan valued its partnership with the US which it wished to expand both bilaterally as well as in terms of regional and international cooperation.

The invitation comes at a time when after nearly a year in office, Joe Biden has not made any direct contact with Prime Minister Imran Khan, while he has called or met with many world leaders .

President Biden has invited 110 leaders from government, civil society, and the private sector. The summit will focus on challenges and opportunities facing democracies and will provide a platform for leaders to announce both individual and collective commitments, reforms, and initiatives to defend democracy and human rights at home and abroad, said the US State Department.

“Pakistan will, meanwhile, continue to support all efforts aimed at strengthening dialogue, constructive engagement, and international cooperation for the advancement of our shared goals”, Washington was clearly told.

While Russian and China have not been invited, Joe Biden took an extra step to invite Taiwan which has infuriated Beijing. Both Russia and China have rejected the Summit for Democracy, saying it creates new dividing lines in the international community which contradicts the development of the modern world and asked the United States not to worry about democracy.

Opinion was divided in Islamabad about whether Pakistan should participate or not. While there were strong voices which wanted Prime Minister Imran Khan to participate, other cautioned that since a close ally China had not been invited and Taiwan would be present, it would be prudent for Pakistan to step away.

“Pakistan is a large functional democracy with an independent judiciary, vibrant civil society and a free media. We remain deeply committed to further deepening democracy, fighting corruption and protecting and promoting human rights of all citizens”, said the Foreign Office in response to the US invitation.

In recent years, it added, Pakistan has instituted wide-ranging reforms aimed at advancing these goals. These reforms have yielded positive results.

Meanwhile, in an important development in the Brussels, the European Union has welcomed the progress made by Pakistan to implement the Financial Action Task Force Action Plans and ongoing efforts to address the remaining actions.

The announcement was made in a Joint Press Communique after the sixth round of the European Union-Pakistan Strategic Dialogue and was issued after deliberations between and Foreign Minister Shah Mahmood Qureshi and High Representative for Foreign Affairs and Security Policy and Vice-President of the European Commission (HR/VP) Josep Borrell .

While the HR/VP raised concerns, including on the death penalty and misuse of the blasphemy laws, he expressed appreciation for the adoption of the Protection of Journalists and Media Professionals Bill and hoped that the Anti-Torture Bill and other human rights-related legislations that are before the parliament would be adopted soon.

High Representative Borrell underscored that the EU is following the human rights situation in Jammu and Kashmir closely and restated the need for restraint, de-escalation of tensions and resolution of the dispute through dialogue and constructive political and diplomatic engagement, after Qureshi reiterated Pakistan’s deep concern about human rights violations by India in Jammu and Kashmir, and efforts to change the demography of the disputed territory in violation of UNSC resolutions.

The HR/VP welcomed as an important step, in the interest of regional peace and stability, the agreement of February 2021 between India and Pakistan for observance of ceasefire understanding at the Line of Control in Jammu and Kashmir and to engage through the established mechanisms.

Both sides expressed a strong political commitment towards the GSP+ and the implementation of 27 international conventions on human rights, labour rights, protection of the environment and good governance that are linked to it.

The HR/VP and the foreign minister reaffirmed their resolve to strengthen and protect human rights as well as fundamental freedoms with a focus on freedom of religion and belief, inter-faith harmony, religious tolerance and peaceful coexistence, and rights of minorities.

Foreign Minister Qureshi also raised concern at the rising trends of Islamophobic acts, xenophobia and religious intolerance in the world and the need for common resolve to counter them.

They had an extensive exchange of views on the situation in Afghanistan. They agreed on the importance of maintaining sustained engagement with Afghanistan to promote stability and countering narcotics as well as the threat of terrorism.

They expressed grave concern at the potential for an economic collapse and significantly worsening humanitarian crisis and a fresh flow of refugees. Both sides acknowledged Afghanistan’s serious liquidity challenges which strain the legitimate banking services.

They also agreed on the need for continuing urgent and unhindered humanitarian assistance and basic social services support to the Afghan people.

They highlighted the importance of improving the socio-economic situation and preserving human rights, notably those of women and girls, and persons belonging to minorities. Both the sides supported dialogue among the Afghan parties for achieving national reconciliation and underlined the importance of an inclusive and representative government, to enhance the prospects of security and stability.