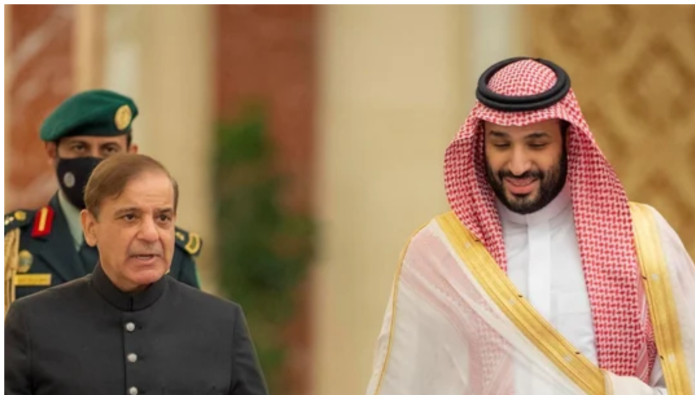 ISLAMABAD: In the wake of statements made against the Kingdom in the context of the OPEC+ decision, Pakistan Tuesday expressed solidarity with the leadership of the Kingdom of Saudi Arabia.

“We appreciate the concerns of the Kingdom of Saudi Arabia for avoiding market volatility and ensuring global economic stability,” the Foreign Office said in a statement.

It added that Pakistan encourages a constructive approach to such issues based on engagement and mutual respect.

“We reaffirm our long-standing, abiding and fraternal ties with the Kingdom of Saudi Arabia.”

Saudi defends oil policy in face of US charges

A day prior, Saudi Arabia rejected the United States’ accusations of aligning itself with Russia amid the Ukraine war by making oil production cuts to drive up crude prices, insisting it was purely a business decision.

“We are astonished by the accusations that the kingdom is standing with Russia in its war with Ukraine,” the Saudi defence minister, Prince Khaled bin Salman, tweeted late Sunday.

The Saudi-led OPEC+ cartel — which includes Russia — has angered Washington by deciding to cut production by two million barrels per day from November, adding further pressure on soaring crude prices.

“It is telling that these false accusations did not come from the Ukrainian government,” Prince Khaled wrote. “Although the OPEC+ decision, which was taken unanimously, was due to purely economic reasons, some accused the kingdom of standing with Russia.

US President Joe Biden pledged on October 13 that “there will be consequences” for US relations with Saudi Arabia after OPEC+ announced last week that it would cut oil production over US objections.

His announcement came a day after powerful Democratic Senator Bob Menendez, chairman of the Senate Foreign Relations Committee, said the United States must immediately freeze all cooperation with Saudi Arabia, including arms sales.

Biden, in an interview with CNN’s Jake Tapper, said he would not discuss what options he was considering.

White House press secretary Karine Jean-Pierre said a policy review would be conducted but gave no timeline for action or information on who would lead the re-evaluation.

The United States will be watching the situation closely “over the coming weeks and months,” she said.

John Kirby, the White House national security spokesperson, said Biden would work with Congress “to think through what that relationship ought to look like going forward.”

“And I think he’s going to be willing to start to have those conversations right away. I don’t think this is anything that’s going to have to wait or should wait, quite frankly, for much longer,” Kirby added.