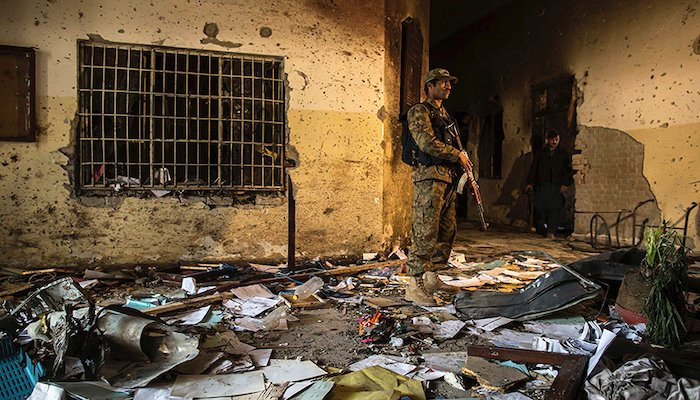 ISLAMABAD: As the nation mourns seven years of the terror attack at the Army Public School (APS) in Peshawar, which martyred 148 people, making it the deadliest act of terrorism in Pakistan’s history, Prime Minister Imran Khan pledged Thursday never to turn his back on the survivors and parents of the children martyred in the tragedy.

Prime Minister Imran Khan said that Pakistan has “zero tolerance” for violence and elements involved in using it as a tool.

Taking to Twitter, the premier said that the country has “successfully defeated terrorism”.

“Dec 16, 2014, terrorists attacked & martyred over 140 ppl incl 132 children in APS, Peshawar. Pak has successfully defeated terrorism. I reiterate we will never let down the survivors & parents of our martyred children. There is zero tolerance for violence & those using it as a tool,” PM Imran Khan wrote.

Separately, Prime Minister Imran Khan said that he assures the nation that no enemy can demoralise them ever, Geo News reported.

PM Imran Khan went on to say that time has proved that “terror has no religion but a cowardly mindset behind it which can even use unarmed innocent children to fulfill filthy political intentions”.

“This day reminds the entire Pakistani nation of the gruesome tragedy when cowardly miscreants attacked the future of this nation, little unarmed children and martyred them,” PM Imran Khan said.

He said that the day also reminds people of the brave teachers who laid down their lives for the safety of their students.

The sacrifices made by the martyrs of APS haven’t gone in vain because the incident raised the nation’s spirit against terrorism even more rather than lowering them.

“The entire nation is united and we identified and targeted the enemies through the National Action Plan,” PM Imran Khan said.

He urged the nation to pledge to remain united and stand strong against those who spread sectarian, religious and racial discrimination.

“There is no power in the world that could harm Pakistan,” the premier said, quoting Quaid-i-Azam.