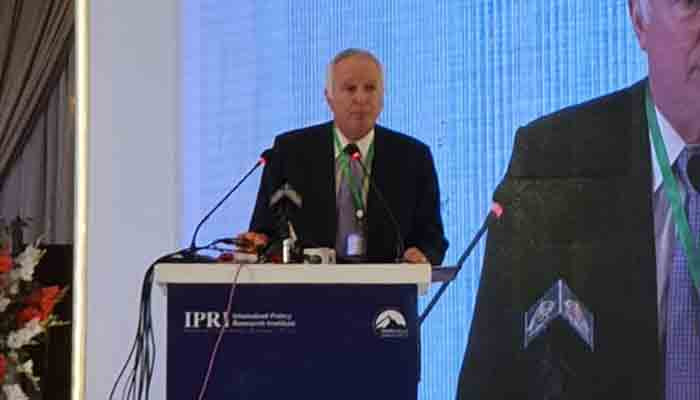 ISLAMABAD: Former American ambassador to Pakistan, Cameron Munter said Tuesday that Pakistan was out of America’s “do more” pressure, adding that it can serve as a key moment for the country.

Munter, a retired diplomat who now works as a global consultant, spoke at the Margalla Dialogue 2021 today where he touched upon US-Pakistan relations.

“It is crucial for Pakistan to focus on economic issues,” said Munter.

He said the US saw the problems of South Asia associated with terrorism and Afghanistan for the last two decades, adding that Washington’s present understanding of Pakistan is based on dated ideas.

Munter said the US was directing its entire energy on tackling climate change, coronavirus, trade and digital governance issues.

“The US is not looking at this region with the same perspective as Pakistan,” he said, adding that like Islamabad, Washington is also facing a host of problems.

Speaking about the US, he said it would be a mistake to consider the US too weak or present it as an all-powerful country.

He also delved into international politics, saying that it was not possible to limit warfare to generals or diplomatic missions to ambassadors alone.

“The foreign minister and diplomats are not just Pakistan’s representatives; its students, cricketers and teachers also represent the face of the country,” he added.

He said that “America’s defeat” in Afghanistan had changed the regional situation, adding that Pakistan was no longer under pressure from the US to “do more”.

“It is a crucial opportunity for Pakistan, considering that it is no longer under America’s “do more” pressure,” he added.

Munter said it is important for Pakistan to outline fresh priorities.

Prime Minister Imran Khan spoke at the opening of the Margalla Dialogue a day earlier, saying that while it was the United States that made mistakes in Afghanistan, Pakistan had to bear the brunt of the situation.

The premier had criticised the Western media and said that instead of giving Pakistan its due credit for the sacrifices it made, the country was accused of playing “a double game” and its reputation was maligned internationally.

“Pakistan was held responsible for the shortcomings of the United States,” PM Imran Khan had said.

The PM went on to say that throughout the war in Afghanistan, Pakistan had to witness the biggest collateral damage as it was the only US ally that suffered more than 80,000 casualties, displacement of millions of people, and a loss of over $100 billion.

“The inability of the national leadership to handle the Afghan situation wisely landed the country into two main pro and anti-America divisions,” he had said.

The prime minister had said Pakistan was blamed for wrong reasons by the international community, whereas it remained mum on the atrocities committed by New Delhi in the Indian Occupied Jammu and Kashmir (IOJK).