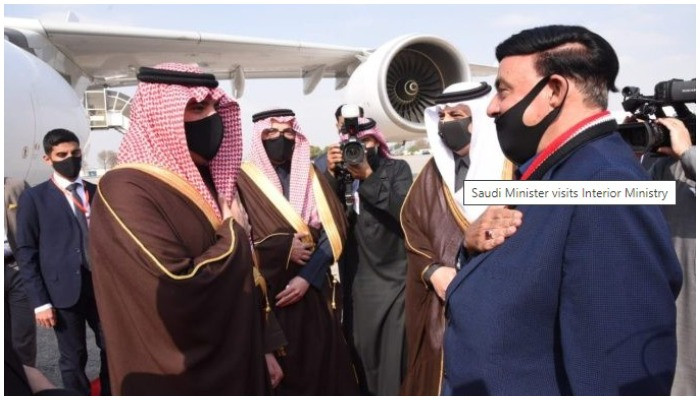 ISLAMABAD: Saudi Interior Minister, Prince Abdul Aziz bin Saud bin Naif along with his six-member delegation on Monday visited the Ministry of Interior and held a meeting with Interior Minister Sheikh Rasheed and other senior officials.

Issues of mutual interests and regional security came under discussion during the meeting, a statement issued in this regard said.

The two leaders stressed the need to further strengthen ties between the interior ministries of Pakistan and Saudi Arabia. Better liaison between the two ministries was needed to address all issues including security challenges, it said.

Speaking on the occasion, Sheikh Rasheed said Pakistan attached great importance to its relations with Saudi Arabia, adding that these relations were long-lasting. Two million Pakistanis working in Saudi Arabia were our precious asset, he added. The Minister thanked the Saudi government for caring for Pakistani workers.

Advisor to the Prime Minister on Accountability Brig (R) Musaddiq Abbasi and Interior Secretary Yousuf Naseem Khokhar were also present in the meeting.