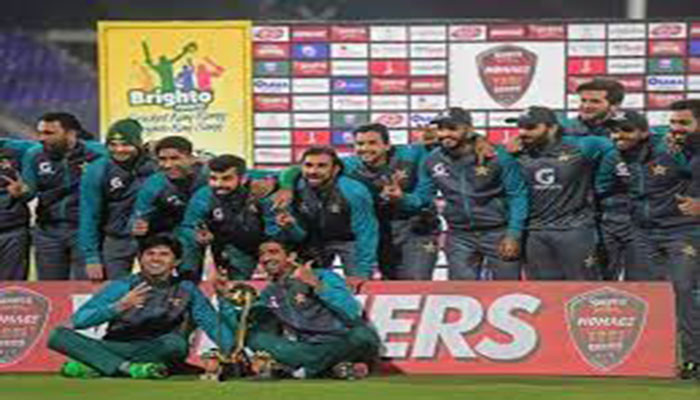 KARACHI: Pakistan pulled off their highest Twenty20 International run-chase in a seven-wicket victory over the West Indies on Thursday to complete a 3-0 series win in Karachi.

Mohammad Rizwan smacked 87 off 45 balls and captain Babar Azam made 79 as the opening pair put on 158 to help Pakistan reach a target of 208 in 18.5 overs in a match that was nearly called off because of COVID cases.

The match was eventually given the go-ahead despite five members — including three players — of the West Indies squad testing positive on Thursday.

That took the total of positive cases in the tourists’ camp to nine after three players and a staff member tested positive on Saturday.

West Indies skipper Nicholas Pooran hit a career-best 37-ball 64 with six sixes and two fours as his side finished on 207-3.

Pakistan won the first match by 63 runs and the second by nine runs, both in Karachi. This is their seventh 3-0 whitewash in Twenty20 International cricket, and their third against the West Indies.

Rizwan, who overturned a first-ball leg-before decision against him, and Babar took the attack to the West Indies bowlers with a stand of 158 in 15 overs.

Babar, who hit nine fours and two sixes in his 53-ball knock, holed out to long-off. Babar and Rizwan registered their sixth century stand in Twenty20 Internationals — all this year — the most by any pair in the format.

India’s Rohit Sharma and KL Rahul have five century stands in T20I cricket. Rizwan, who blasted ten fours and three sixes, fell to a miscued shot off Dominic Drakes with just 24 to win.

Rizwan finished with 1,326 runs in 29 matches in the calendar year — the most by any batsman in T20 Internationals.

Asif Ali hit two sixes and as many fours in his 21 not out to seal the win. The hosts finished 2021 with six wins in eight T20I series, winning 20 of the 29 matches — a T20I record in a calendar year.

Pakistan’s previous highest run-chase was 204, against South Africa at Centurion in April this year. West Indies put on a much better batting display after dismal shows in the first two matches.

Pooran put on 93 for the third wicket with Darren Bravo, who scored an unbeaten 34 as the tourists added 54 in the last five overs.

Shamarh Brooks (49) and Brandon King (43) also played brisk knocks. Brooks, who smashed four sixes and two fours in his 31-ball innings, shared an opening stand of 66 with King after the tourists won the toss and opted to bat. King hit seven fours and two sixes in his explosive 21-ball knock.

Once the two openers departed, Pooran and Bravo took the total to 192. Pooran finally holed out off pacer Mohammad Wasim who finished with 2-44, taking eight wickets in the series. Pooran’s previous high of 62 not out also came against Pakistan at Guyana in July this year.