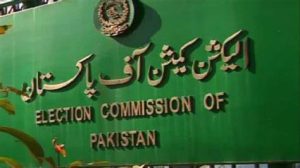 Pakistan Tehreek e Insaaf, the party whose main agenda is to provide justice to all, is now itself under scrutiny for the foreign funding case.
The report prepared by the Election Commission of Pakistan’s inspection committee on the governing PTI’s funding has once again focused attention on opaque fundraising of the political parties. According to the investigation, the party accepted money from foreign nationals and corporations, under-reported funds, hidden multiple bank accounts and refused to reveal details of big transactions. Despite the fact that there is no clear charge of misconduct in the report, the party’s opposition throughout the case raises concerns.
As a response to the ECP’s report, Imran Khan said that he ‘welcomed the scrutiny of ECP regarding PTI’s funding. In a tweet, he added: “The more our accounts are scrutinized the more factual clarity will emerge for the nation to see how PTI is the only political party with proper donor base premised on proper political fundraising.’ He also requested that the ECP investigate the PTI’s rivals, the Pakistan Peoples Party (PPP) and the Pakistan Muslim League (N), claiming that it demonstrates to the nation “the difference between proper fundraising and extortion of money from crony capitalists and vested interests in exchange of favors.
Several Opposition leaders criticized PM Imran Khan and demanded a resignation. PML-N President Shehbaz Sharif termed the report a ‘damning indictment of Imran Khan. Pakistan Peoples Party chairman Bilawal Bhutto said that ‘Pakistan was becoming poor but Imran Khan was getting richer.’ Jamiat Ulema-e-Islam (JUI) chief Maulana Fazl Rehman also said that the PTI foreign funding case has exposed the corruption of Imran Khan and his party. He also called PTI a party of thieves.
Although, the PTI says that funds are genuine donations and audit is welcome. Now they must provide the details of foreign accounts to clear the air and silence their critics and opponents.

Previous articlePeshawar Zalmi appoints Inzamam-Ul-Haq as president
Next articleThe Arrival of First ITI Freight Train From Islamabad to Ankara, Resuming the Route After A Decade Hiatus