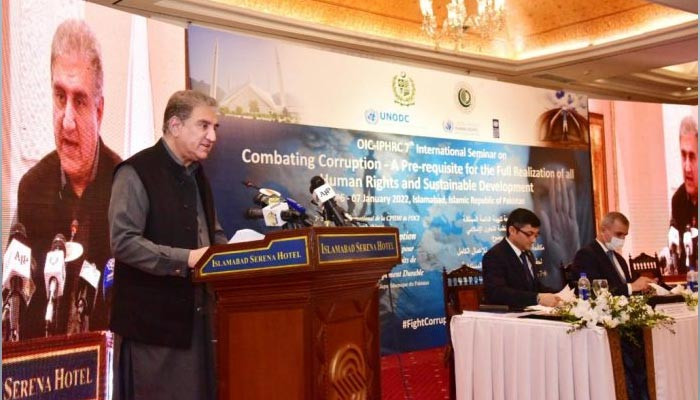 ISLAMABAD: Pakistan is gearing up to host the next Organisation of Islamic Cooperation (OIC) meeting of foreign ministers on March 22 and 23, Federal Minister for Foreign Affairs Shah Mahmood Qureshi said on Thursday.

“March 23 parade for the first time in the history will see participation from a large number of foreign ministers of the Muslim world,” he said while speaking at the inauguration session of a two-day International Seminar on the theme of “Combating Corruption – A Prerequisite for the full enjoyment of all Human Rights and Sustainable Development”.

Sharing details of the upcoming session, the minister said the government is planning to take the foreign ministers to Nathiagali to show them the beauty of Pakistan.

Qureshi said that the 17th Extraordinary Session of the Council of Foreign Ministers of OIC, which was held in December, provided a ray of hope to the Afghan people.

He hoped that the meeting scheduled for March will be meaningful as well.

During the ceremony, he presented an actionable way forward for the OIC group in curbing corruption and realising the human rights agenda through the creation of an inter-governmental committee, establishment of an OIC protocol, and mechanism for mutual legal assistance, reviewing unequal investment treaties, and formation of a global beneficial ownership registry.

The minister said that in line with Prime Minister Imran Khan’s vision, fighting corruption and ensuring the protection of all human rights were the top priorities of the present government.

Qureshi said that corruption is an obstacle in realising all human rights — civil, political, economic, social and cultural — as well as the right to development.

“It strikes at the roots of good governance and democracy. It erodes public trust in the legitimacy of state institutions, undermines the rule of law, and violates the values of transparency, accountability, justice and fair play,” he added.

With additional input from APP