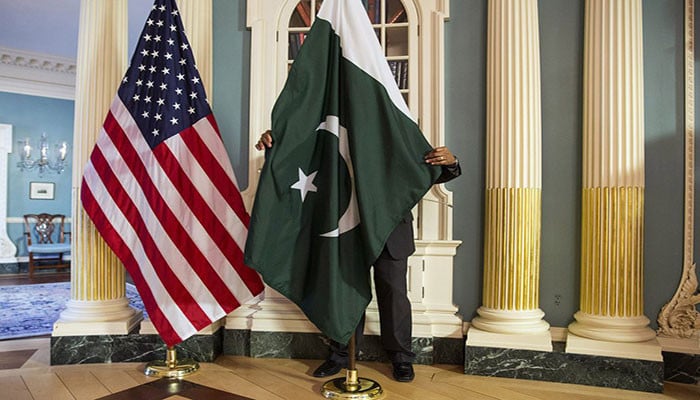 ISLAMABAD: Pakistan and the United States both acknowledged their desire to further strengthen bilateral relations based on common interests in a meeting on Saturday.

The US senators, while acknowledging the importance of long-standing Pak-US ties, affirmed the desire to further strengthen the bilateral relationship in its myriad dimensions.

The visiting US delegation included Senators Angus King, Richard Burr, John Cornyn and Benjamin Sasse. All four senators are members of the Senate Select Committee on Intelligence, while Senator King is also member of the Senate Armed Services committee.

“The foreign secretary underscored that Pakistan valued its long-standing relationship with the United States and wanted to further deepen bilateral ties based on shared interests,” said the Foreign Office.

He also emphasised that deeper engagement between the two countries was pivotal for peace, security and development in the region.

The visit by US senators comes just few days after Pakistan declined an invitation from President Joe Biden to participate in the Summit of Democracy held on Wednesday.

While declining the invite, the Foreign Office made it clear that Pakistan would remain in contact with the US on a range of issues, and at an opportune time in future they could engage on the subject of ‘democracy’.

On Friday, the spokesperson at the Foreign Office had further elaborated, “We remain closely engaged with the US and we wish to expand our ties bilaterally as well as in terms of regional and international cooperation.”

Afghanistan was raised in the delegation-level talks, which saw the senators appreciating Pakistan’s role in the evacuation of US nationals and others post Aug-15, 2021 and stressed the importance of closer cooperation to support the objectives of a peaceful and stable Afghanistan.

The foreign secretary briefed the senators on the serious humanitarian situation in Afghanistan and underscored that the international community must help the Afghan people avert the crisis through immediate support and financial assistance.

“In this regard, he stressed the importance of release of Afghanistan’s frozen financial resources,” said the statement.

The foreign secretary also apprised the visiting delegation about Pakistan’s efforts to mobilise international support through multiple regional and international mechanisms and mentioned, in this context, the extraordinary session of the OIC Council of Foreign Ministers being hosted in Islamabad.

Highlighting Pakistan’s pivot to geo-economics, the foreign secretary emphasised that Pakistan welcomed enhanced bilateral trade and greater investments from the US. He hoped that the US companies would reap dividends from Pakistan’s emerging market status.

The foreign secretary also briefed the delegation about unabated gross human rights violations against the Kashmiris in Indian Illegally Occupied Jammu and Kashmir (IIOJK) and underscored that the US Congress must play its due role in this regard.