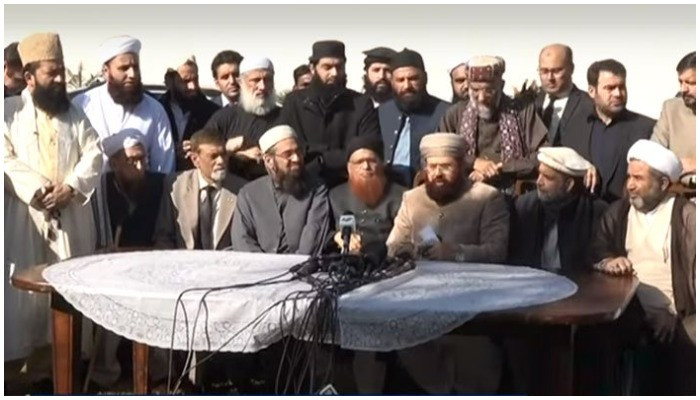 ISLAMABAD: The religious scholars of Pakistan vowed on Tuesday to bring the culprits involved in the lynching of Sri Lankan citizen Diyawadanage Don Nandasri Priyantha to justice, while addressing a press conference flanked by Sri Lankan High Commissioner Mohan Vijay Vikrama in Islamabad.

A delegation of religious scholars from all sects, led by Wifaqul Madaris Al-Arabia President Mufti Taqi Usmani, met the Sri Lankan high commissioner to offer their condolences over the gruesome murder of Priyantha in Sialkot.

The scholars said their visit aimed to express grief over the unfortunate incident and assured the Sri Lankan government’s representative of dealing with the issue justly.

“The incident has shaken the entire nation to its core,” Mufti Taqi Usmani said in his address.

He expressed solidarity with the Sri Lankan people on behalf of the religious scholars of Pakistan, saying that they [scholars] equally share the other side’s grief.

Mufti Usmani said that the religious scholars have resolved to make sure that the culprits are given due punishment.

He said that Priyantha’s family will be compensated for their loss.

“Although compensation [for the loss of their life] cannot be made by anyone,” he said, adding that the delegation has requested Mohan to convey their heartfelt condolences to the people and government of Sri Lanka.

He also thanked Mohan for giving them a chance to meet him.

Islamic Ideology Council Chairman Qibla Ayaz said that action will be taken against the incident in line with the laws of Pakistan.

Former senator and religious scholar Sajid Mir said that no amount of condemnation of the Sialkot incident is enough. “We are with Priyantha’s family,” he added.

Sahibzada Hamid Raza said that the religious scholars of Pakistan will play their role in bringing the culprits to justice.

Moreover, the Sri Lankan high commissioner said: “All of us strongly condemn the incident.”

“Not only should such incidents not occur in Pakistan, but the entire world as well,” he said.

The high commissioner said that he is satisfied with the measures taken by the government of Pakistan in dealing with the issue.

He reiterated that the incident will not affect the ties between Pakistan and Sri Lanka.

A joint statement issued by the religious scholars of Pakistan called the Sialkot incident a “violation of the Constitution of Pakistan and Islamic laws, which caused great humiliation to the country”.

Diyawadana Priyantha, working as a manager at a private factory in Sialkot, was lynched Friday by a mob after being accused of blasphemy.