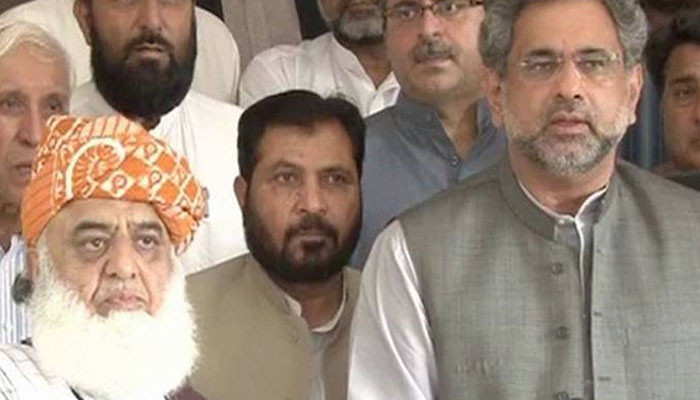 LAHORE/ISLAMABAD/KARACHI/PESHAWAR: The Steering Committee of Pakistan Democratic Movement (PDM), chaired by PML-N leader Shahid Khaqan Abbasi, has prepared recommendations regarding the long march and resignations from assemblies to protest against the incumbent government and rising inflation.

During the meeting, recommendations were made in support of the resignations, which will be presented at the meeting of heads of PDM parties. The committee members agreed that the opposition alliance should hold a long march and tender resignations from assemblies, but the time and date of the long march and resignations will be decided in the today’s (Monday) meeting, which will be chaired by the movement’s chief Maulana Fazlur Rehman. The meeting will be held in Islamabad.

According to sources, conventions and protest rallies will be held in all the four provinces before the long march. Earlier on Friday, PML-N President Shehbaz Sharif announced that the PDM would decide the details regarding the long march in the December 6 meeting, rejecting the notion of a rift between the opposition parties. He cited soaring inflation and unemployment as two major issues, threatening the very existence of Pakistan.

“The claims of the PTI government that it is governing in an honest and transparent manner is the biggest lie in the country’s history,” said the PML-N president, who is also the Leader of the Opposition in the National Assembly, while addressing a news conference.

Meanwhile, PPPP Central Information Secretary and MNA Shazia Atta Marri has said the Pakistan People’s Party (PPP) will not become a part of Pakistan Democratic Movement (PDM) again but it along with opposition parties will work on a joint strategy to give tough time to the government in the Parliament.

Imran Khan has bowed in front of the IMF and his government has also been acting upon the dictation of loan giants by imposing heavy taxes on people, which is a highly regrettable decision of this incompetent government, she said while holding a joint press conference here Sunday in Clifton, Karachi.

She said that Imran Khan’s government was putting a heavy burden of taxes on the people of the country by levying a tax of over Rs27 on petrol and Rs30 on diesel while the prices of oil were being reduced globally.

Meanwhile, Minister of Defence of Pakistan Pervez Khattak on Sunday said that no one is audacious to destabilise the federal government. He said that despite during opposition, his government completed RT bus project. The project of RT bus service is expanded from Peshawar to Dera Ismail Khan Motorway, reported a private news channel.

He went on to add that that he stands along Prime Minister Imran Khan. Along with the criticism and opposition, the improvement is needed, he said. Exports have increased to 3 percent while inflation is an international problem whereas a difference between demand and supply of oil could also be catered.

He further said that if anyone has solution of the current problems, these must be shared. The previous governments merely took debts, while the current government aims to return pending debts.