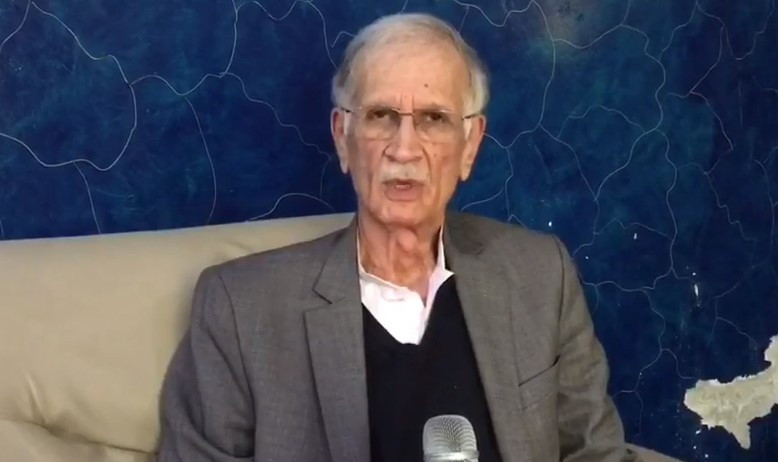 Federal Defence Minister Pervez Khattak on Tuesday issued a clarification regarding his earlier statement on the Sialkot lynching and said that he “vehemently condemns” the incident because “Islam does not allow the killing of humans, irrespective of their religious beliefs.”

In a video message, the minister said that his earlier statement has been doing the rounds on media so he would like to issue a clarification in this regard.

“I was asked whether the Sialkot lynching occurred because of the deal between the government and the Tehreek-i-Labbaik Pakistan (TLP), and in response, I had said that no political party or the government should be associated with the incident.”

“Those involved in the incident acted on their own, and did something wrong,” he said, adding that the government is trying its best to punish the culprits in a way so as to make an example out of them in Pakistan.

Last week, A Sri Lankan national, working as a manager at a private factory on Wazirabad Road in Sialkot, was tortured to death by a mob over allegations of blasphemy.

“Others involved in the incident, who are at large, are being traced, and the government will ensure that they receive the strictest possible punishment.”

What had Khattak earlier said?

It should be recalled that on Sunday, Khattak had said that “murders take place when emotions run high in young people.”

“Everyone has a different mindset; a mob gathered and someone chanted a slogan related to Islam that led to such an incident,” Khattak had added.

The minister admitted that he can also make a mistake when overcome by emotions, but added that such instances did not mean “Pakistan is on the verge of catastrophe.”

He had also said there should be “no link between the Sialkot mob’s lynching of a Sri Lankan man and the government’s decision to relax the ban on the Tehreek-e-Labbaik Pakistan (TLP).”

A reporter then asked the minister if he was linking the alleged killings of nine police officers by TLP protesters, as well as Kumara’s, to “emotions”.

Khattak immediately shifted the blame to the media, declaring, “Why don’t you change this mindset? Youngsters fight and murders take place [at times]. It is the job of the media to inform the youth.”

“The media only accepts advertisements and makes money,” an irate Khattak had claimed.

On November 2, the government began implementing the accord with TLP, with reports suggesting that it had released more than 800 supporters of the party arrested across Punjab.

A week later, on November 7, TLP ceased to be a proscribed organisation after the government accorded approval to the Ministry of Interior’s summary asking for its removal from the First Schedule of the Anti-Terrorism Act, 1997.

TLP was placed in the said schedule in April 2021 on the recommendation of the Punjab home department.