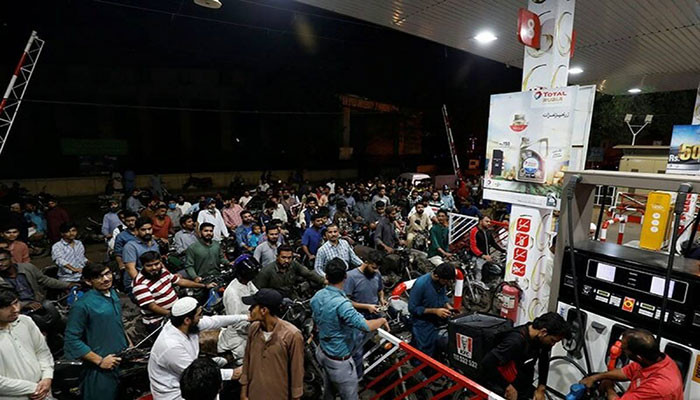 KARACHI/ ISLAMABAD: After Wednesday’s panic buying of petrol and Thursday strike of filling stations, the government and petroleum dealers agreed on a formula, which envisages 25 percent increase in dealers margins with the assurance from the Petroleum Division that margins will be readjusted after six months (June ‘22) according to the inflation level prevalent at that time.

Federal Minister for Information and Broadcasting, meanwhile, announced that the petroleum dealers have ended there stike.

The copy of the agreement obtained by ‘The News’ states that for revision of margins of petroleum products, multiple consultation sessions were held with Pakistan Petroleum Dealers Association which included participation of key OMCs, OCAC, and other leading players.

The document said that all stakeholders appreciated Petroleum Division’s proposal for enhancement of 99 paisa in the existing margin of petrol i.e. Rs3.91/liter. The proposal for 25% increase in the margin of dealers will cover all delays in the revision of margin in the past and would also help dealers in mitigating the impact of inflation. The Petroleum Division has assured that it will put all its endeavors to defend the said proposal of 25% increase in the existing margin before the Economic Coordination Committee of the Cabinet and the federal cabinet so that this historic relief to the petroleum dealers in the shape of sizeable enhancement in their margins becomes a reality, indicates agreement.

According to the document, all parties clearly understand that passing on the extra costs to the general public/ consumers of petroleum products is not viable. However, Petroleum Division assured the Dealers Association that after 6 months (during June, 2022) margins will be readjusted according to the level of inflation prevalent at the time.

The dealers association suggested that in the subsequent adjustment (during June, 2022) the margins may be fixed in percentage terms and Petroleum Division will put its best efforts to obtain approval of the competent forum, for revision of dealers’ margin up to 4.40 percent of the selling price, envisages the document.

It says that arrangement of enhancing margin presently by 25percent and subsequent readjustment after 6 months will ensure safety and security of the business of the petroleum dealers without passing the extra burden to the general public and both parties agreed to work mutually for the betterment of the country.

Confirming the agreement, the Minister for Energy, Hammad Azhar, said the dealers have called off the strike after agreement that the government will notify 0.99 paisa increase in their margins, after six months, following cabinet approval. The dealers margin will likely go up to 4.4pc.

Earlier, throughout on Thursday long queues, overcharging and brawls were witnessed at the functional fuel stations in almost all major cities of the country. According to a survey, only 20 per cent fuel stations were seen providing service and 80 per cent were found closed in Rawalpindi and Islamabad due to strike of Pakistan Petroleum Dealers Association (PPDA). The Pakistan Petroleum Dealers Association (PPDA) Wednesday gave a call for countrywide strike over ‘low profit margin’ issue.

People in almost all major cities were found running from one fuel station to the other in search of petrol, but in vain. Some of shopkeepers were found selling loose petrol for as much as Rs250 per litre. The petrol pumps throughout the Karachi were covered with tents or iron sheets. On Thursday morning commuters were seen lined outside the pumps, which resulted in traffic jams. By evening most of the pumps that were open ran out of petrol. Students found it difficult to return home from schools or universities, as public transport went thin; rickshaw and the ride-hailing applications had their fares high. The school going student particularly female students faced difficult situation as vans did not pick them up from their houses. The commuters faced shortage of private service vehicles on all routes. All bus stops were jam packed with passengers waiting for wagons and buses.

Although the Pakistan State Oil (PSO), state-owned fuel company, and Shell Pakistan announced to keep its company operative stations open across the country, but most of its pumps remained closed. One of the workers at the PSO pump told ‘The News’ that due to the panic buying of petrol, they have ran out of it. Few people came up with a creative solution to get petrol filled in huge milk cans. Two videos circulated on social media in the wee hours of Thursday showing how people on Twitter were hoarding petrol in huge milk canisters.

The Petroleum Dealers Association Chairman Malik Khuda Baksh who owns several pumps in city, told ‘The News’ that only those pumps were open which were directly owned by the company. The franchises, he stressed, remained closed. The ambulances and other emergency vehicles, he said were provided with the petrol.

In Karachi, the fares of rickshaws and taxis, however, increased manifold. One of the residents of Gulshan-e-Iqbal shared how she had to pay Rs400 to travel to the University Road from Gulshan’s 13-D, whereas, normally she paid Rs300. Similar was the case with ride hailing applications. One of the commuters shared how he found the fare to be higher than normal days.

In twin cities of Rawalpindi-Islamabad too, rickshaw, taxicabs and private loading vehicles were found looting the public with impunity. They were demanding double, triple fares on the excuse of shortage of petrol. Scuffles among citizens were also witnessed during the panic buying of petrol. With patience wearing thin and fuel exhausting at the filling stations, several car owners tried to get ahead of others, engaging in arguments and brawls. The Rawalpindi-Islamabad administration were reluctant to take action against profiteers selling petrol in ‘black’. Several Metro buses also stopped functioning between Rawalpindi and Islamabad due to shortage of petrol.

In Peshawar, some PSO stations were open, while a vast majority were closed. Long queues had formed outside the select few that were still operational.According to President Balochistan Petroleum Association Qayyumuddin, all petrol stations would remain closed till the demands of the dealers are met.

Commenting on the crisis, Pakistan Muslim League Nawaz (PMLN) President and Opposition Leader in National Assembly Shehbaz Sharif said people were standing in miles-long queues, and they were missing Nawaz Sharif and the Old Pakistan.

In a statement issued here, he said that it gave him very much pain as he watched the nation queuing up for sugar, flour and petrol. He said the poor Pakistanis were finding survival difficult because of the incumbent government while Imran Niazi’s cruelty and apathy was further complicating the plight of the poor. The entire country was trapped in the smog of Imran’s incompetence and corruption for over three years now, he said, adding that ration cards, queues, inflation, U-turn, lies, corruption and incompetence were the hallmark of this so-called “New Pakistan”. Every single crisis in the country from flour to sugar to petrol and gas was a product of Imran’s corruption, incompetence and mismanagement, Shehbaz added. “Now tell the nation, Imran Niazi Sahib, who’s a thief,” he told the prime minister. The PMLN president said gas was already hit by shortages while the PTI government is planning to increase the gas tariff by 400 per cent. Domestic and commercial users would pay hundreds more as the government would raise the cost from Rs1,400 mmbtu to Rs1,700 mmbtu, he added. This, he said, was equivalent to slaughtering the nation. Shehbaz pointed out that despite the start of crushing season, the supply of sugar had not been restored, which means another sugar crisis was knocking on the door at a time when its cost had already jumped from Rs52 to Rs140. The dollar was shooting through the roof at over Rs177 and for every Rs1 drop in value of currency inflation was rising by 14 to 16 basic points, he claimed.

Shehbaz said he was astounded by Imran’s shamelessness who had forgotten all about his lectures on political morality and anti-devaluation and anti-inflationory sermons from the container. “The roar of the raging monster of inflation is resonating through every street of Pakistan that the Prime Minister is a thief.

Separately, Pakistan People’s Party Chairman Bilawal Bhutto Zardari expressed concern over the ongoing petroleum products crisis, saying the selected government, due to its incompetence, had always turned every issue into a painful crisis. “People are already forced to buy the most expensive petrol in the history of the country, and in such circumstances, another increase in the price of petroleum products would be disastrous,” he warned. He said the incumbent government had made people’s lives a living hell due to inflation and crises in all fields.

The PPP chairman pointed out that expensive electricity with loadshedding, and expensive petrol and gas with their scarcity, are the gifts of PTIMF-deal. “From day one, the PPP declared the PTI budget a failure, and now the results of such budget have proven that Imran Khan is an incompetent ruler,” he said.

He said most filling stations across country remained closed on Thursday and the few that were open saw long queues of vehicles. “By stalling the affairs of everyday life, Imran Khan has made the life of every Pakistani full of difficulties,” he added.