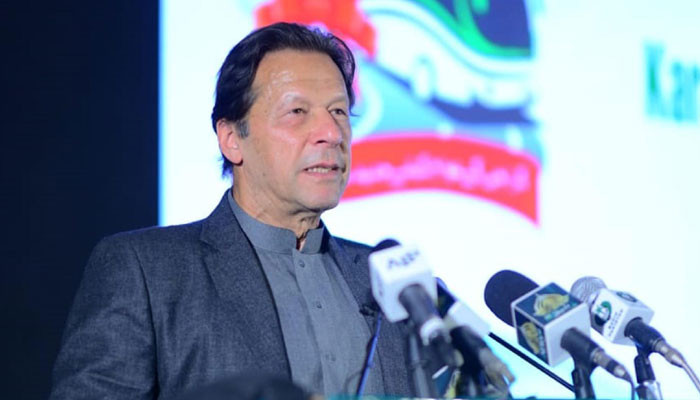 Addressing on the occasion, he said like other modern metropolitan cities, Karachi required an autonomous municipal system with financial independence. He called upon the Sindh government to work with Centre for development of the city.

The federal government, through the Sindh Infrastructure Development Company Ltd (SIDCL), has spent a total sum of Rs35.5 billion to build the infrastructure of Green Line Corridor to enable 80 latest hybrid air-conditioned buses to ply on it after importing them from China.

The buses will ply on a 21-km-long corridor from Surjani Town to Numaish (Old Exhibition). The corridor will have 21 passenger stations and the service is expected to benefit 135,000 passengers every day. The maximum fare will be around Rs55. The passenger stations will have escalators, standby generators, and special ramps for differently-abled persons. The Green Line bus service will immediately start its trial operation, which will continue till December 24. The commercial operation of the service will begin from December 25 while the full-scale service will begin from January 10. The ground-breaking of the Green Line project was performed in 2016 during the government of Pakistan Muslim League (Nawaz).

While speaking at the launching ceremony, Prime Minister Imran Khan said that any modern city couldn’t successfully run without a modern transport system and the Green Line project will help fulfill modern day transportation requirements of the Karachi residents. Describing Karachi as the country’s “engine of growth”, he said the prosperity of Karachi was considered as that of Pakistan. Imran said like London, Paris and New York are contributing towards the country’s development and prosperity, the success of Karachi will also help Pakistan achieve progress and prosperity.

He described the federal government’s Green Line project as the first step towards the modernization of Karachi’s transportation, adding the previous governments did not focus on modern transportation system for the mega city. The PM said that Karachi, like other modern metropolitan cities, required an autonomous municipal system with financial independence. He said that mayor of Karachi should be elected through direct voting and he should be fully empowered and autonomous to run the provincial capital.

Imran invited the Sindh government to become a partner of his government’s drive to launch the Universal Health Insurance Scheme being unfolded across the country. He said that underprivileged people in Khyber Pakhtunkhwa and Punjab were now entitled to get the best healthcare treatment services at any of the private hospitals. The PM also asked the Sindh government to grant permission to develop the Bundal Island off Karachi’s coast into a modern city, which would generate massive job opportunities and revenue for the province. He informed the audience at the ceremony that the ground-breaking of K-IV bulk water supply project would be performed next month. Wapda will build this project in 13-14 months to overcome acute water shortage.

Speaking on the occasion, Federal Planning and Development Minister Asad Umar said the Sindh Infrastructure Development Company Ltd was also purchasing buses for the Orange Line section of the BRTS in Karachi being built by the Sindh government. He said the federal government was very much on the track to complete the rest of the projects as its obligation to achieve the Karachi Transformation Plan announced by the PM last year.

Earlier, an ugly situation developed when the newly-installed SAPM on Sindh Affairs, Dr Arbab Ghulam Rahim, and Leader of Opposition in Sindh Assembly, Haleem Adil Shaikh, bickered and wrangled on issues related to the PTI’s affairs in the province, at a top-level meeting chaired by Prime Minister Imran Khan at the Sindh Governor House. The meeting was attended by the regional presidents and general-secretaries of Pakistan Tehreek-e-Insaf in the province. Sindh Governor Imran Ismail was also present on the occasion. Dr Arbab Ghulam Rahim, who also served as former Sindh CM, complained said that the Sindh governor played no role while the PTI workers were being victimised on political grounds. Opposition Leader in the Sindh Assembly, Haleem Adil Shaikh, strongly rejected Rahim’s assertions, saying there was no truth in the reports leading to a loud wrangling between the two ignoring the decorum of the top-level meeting.

Rejecting the reports of an altercation between PTI’s senior members, the PTI spokesman said no acrimonious exchange took place during the meeting and the Pakistan People’s Party was behind such disinformation campaign against the PTI. He said that all the leaders and workers of the PTI stood united against the ruling mafia in the province.

During the meeting, the PM took into consideration the overall political situation and development projects being completed in Sindh. Imran urged the Sindh government to participate in all the socio-economic development schemes including Ehsaas Programme, Health Insurance Programme, Rashan Discount Scheme, and Kissan Card. He was of the view that the people of Sindh couldn’t be deprived of the benefits of the welfare initiatives of federal government. He said that all the projects of his government were aimed at welfare and bringing an improvement in the lives of people.

Meanwhile, Sindh Information and Labour Minister Saeed Ghani said given the Prime Minister Imran Khan’s past practice of visiting Karachi only for a few hours, he should stay for a few days in Karachi to show his affinity to Sindh.

Talking to media persons at the Karachi Press Club, the Sindh information minister said that whenever PM Imran Khan visited Karachi during the last three years, his visit to the city did not last more than five hours. He must better stay in Karachi for a few days, he said.

Ghani urged the PM to practically do something for the development of Sindh instead of making misleading announcements. He invited PM Khan to visit public healthcare facilities in the province treating cancer patients free of charge. The PM should also visit the National Institute of Cardiovascular Diseases where treatment facilities were provided to the heart patients from all over the country. “The PM should also travel on the roads built by the Pakistan People’s Party’s Sindh government to provide connectivity to Thar desert.”

He reminded the projects of purchasing new fire engines for Karachi and the Green Line bus service were launched during the term of the previous federal government while the incumbent PM was only inaugurating these schemes.

The Sindh minister said the federal government has failed to complete a single development project for Karachi in last three-and-half-years.

Handing over a cheque of Rs50 million grant for the KPC, Sindh information minister said that it was obligatory upon the PPP’s Sindh government to help out the press clubs and representative associations of media persons owing to the hardships of the journalists as many of them had lately been rendered jobless.