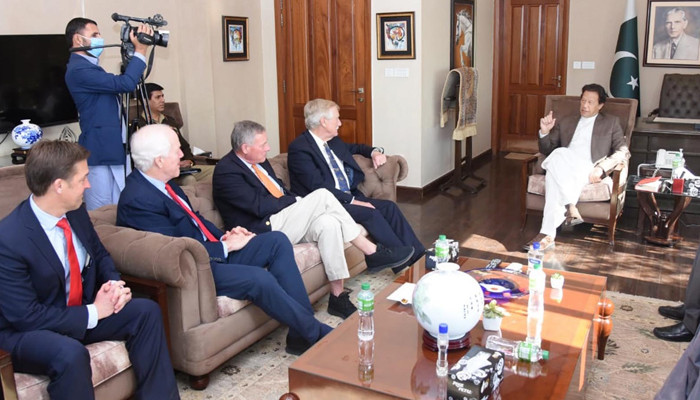 ISLAMABAD: Prime Minister Imran Khan on Saturday called on the United States to play its role in maintaining peace and stability in the region, as the situation evolves in Afghanistan and India continues its barbarity in occupied Kashmir.

The prime minister, according to a statement from the PM’s Office, stressed America’s role during a meeting with a four-member delegation of the US Senate — Senators Angus King, Richard Burr, John Cornyn, and Benjamin Sasse.

All four senators are members of the Senate Select Committee on Intelligence, while senator King is also a member of the Senate Armed Services Committee.

The prime minister underlined that Pakistan values its long-standing relationship with the United States and is committed to expanding it in all spheres, particularly in the economic dimension, the statement said.

PM Imran Khan reiterated that a deeper and stronger partnership between the two countries was mutually beneficial and critical for the region’s peace, security, and prosperity, it added.

Speaking on the evolving situation in Afghanistan, the prime minister emphasised that Pakistan and the US “must have a deeper engagement” to promote the shared objectives of peace, stability, and economic development.

He particularly underscored the urgent need to support the Afghan people by taking all possible measures to prevent a humanitarian crisis and economic collapse.

Apprising the delegation about the continuation of egregious human rights violations in the Indian-occupied Jammu and Kashmir, the prime minister said the extremist and exclusionist policies of the RSS-inspired BJP were posing a threat to regional peace and security.

He underscored that, for its part, Pakistan remains ready to pursue measures that would reinforce peace, stability, and prosperity in the region, if the enabling environment was created by India.

According to the PM Office statement, recalling the collective struggles of Pakistan and the US over the decades in promoting peace and security globally, the senators deeply appreciated Pakistan’s recent contribution in the evacuation of the American nationals and others from Afghanistan post-15 August.

The senators “reaffirmed their commitment to a stable and broad-based Pakistan-US bilateral relationship”, the statement said.

They emphasised that, given the size of Pakistan’s population as well as its geo-strategic location, Washington and Islamabad “should make determined efforts to promote trade, investment, and economic cooperation”.

The premier also highlighted the importance of closer cooperation to address the security threats in the region, including terrorism.

Pakistan turns down US invitation

The meeting with the senators comes after Pakistan turned down America’s invitation for participation in the Summit for Democracy, a virtual event set to take place December 9-10.

According to a statement issued by the Foreign Office on Wednesday, Pakistan thanked the US for the invitation but said that it would engage with the country on a wide range of issues “at an opportune time in the future.”

On Friday, the Foreign Office still appeared to be reluctant to explain why Pakistan had declined the invitation from US President Joe Biden to attend the summit.

Several queries were raised during the weekly media briefing but the spokesperson chose not to respond directly, except to say: “With regard to the Summit for Democracy, I would like to say that our issued statement speaks for itself and I would like you to refer to it. It was a considered decision.”

It is also pertinent to mention here that the US has boycotted the Winter Olympics being held in Beijing, which was followed by a “domino effect”, as Britain, Australia, and Canada followed suit.

“I don’t see any need to be worried about any domino effect,” China’s Foreign Ministry spokesman Wang Wenbin told a daily news conference when asked about the chance of more boycotts on Thursday.

Meanwhile, in response to a question during the press briefing, Pakistan’s Foreign Office spokesperson said: “The Olympic Spirit espouses fair participation in the events. Like in all previous Olympics events, Pakistan would like to see the Olympics Spirit upheld in true sporting fashion. Pakistan also opposes any form of politicisation of sports and hopes that all nations would come together in Beijing and afford their athletes the opportunity to compete against the best and showcase their skills”.