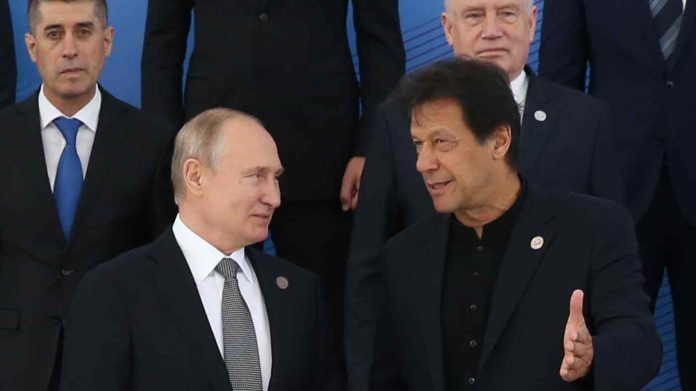 Prime Minister Imran Khan’s position toward the West is becoming increasingly defiant as he set to visit Russia from February 23 to 25 after completing his “historic visit to China” and attending the Beijing Olympics, which the US and several other western countries had boycotted.
It will be the first time after 23 years that a Pakistani prime minister will visit Russia.
In a statement, FM Qureshi said,” Prime Minister Imran Khan will visit Moscow this month.” He said that Pakistan’s relations with Russia are on a positive trajectory.
Diplomatic sources confirmed on Sunday evening that the premier was expected to undertake the “all crucial” visit of Moscow in the last week of February.
PM Imran and Russian President Vladimir Putin are expected to exchange views on bilateral cooperation as well as regional and international issues of mutual interest.

In a telephonic conversation with Putin on January 17, PM Imran had underscored that Pakistan’s bilateral relationship with Russia was on an upward trajectory, with an increased focus on trade and economic ties and energy cooperation. He had reiterated the government’s resolve for early realization of the Pakistan Stream Gas Pipeline Project. According to PM Imran, he and Putin had agreed to enhance bilateral cooperation in different areas, increase high-level exchanges, and remain in close contact on matters relating to Afghanistan. PM Imran had underscored that a peaceful and stable Afghanistan was pivotal for regional stability.

A final schedule for the PM’s visit is being prepared, according to the sources. Pakistan and Russia are also expected to strike major deals during PM Imran Khan’s trip.