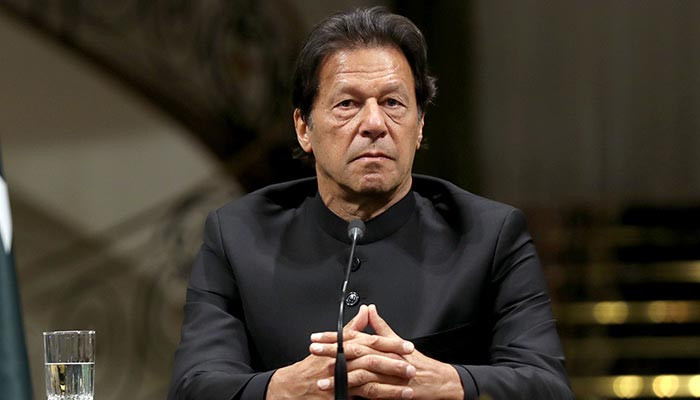 ISLAMABAD: In his message on Kashmir Solidarity Day, Prime Minister Imran Khan on Saturday reiterated that Pakistan stands united with Kashmiri brothers and sisters and urged the international community to take notice of India’s crimes against humanity.

Taking to his Twitter handle, the premier wrote: “Modi’s fascist policies of oppression [and] violence have failed to crush the spirit of the Kashmiri resistance in Indian-Occupied Kashmir (IoK).

The premier stressed that it is time the world takes notice of India’s grave human rights violations in IoK which include crimes against humanity, war crimes and genocidal acts as well as the threat of forced demographic change.

“All these are in complete violation of the Geneva Conventions,” he underlined, adding that it is the international community’s responsibility to ensure an impartial plebiscite in Kashmir.

PM Imran Khan wrote: “The world must not ignore the plight of the people of IoK and their undeniable desire to free themselves from the Indian state’s draconian military occupation.”

In a separate statement to mark the day, he said: “It is time for the international community to make India accountable for its heinous crimes in IoK and to work towards a just and peaceful settlement of the Jammu and Kashmir dispute in accordance with the UN Security Council Resolutions and the wishes of the Kashmiri people.”

Every year, Pakistan commemorates Kashmir Solidarity Day on February 5 to reaffirm its unwavering support to the Kashmiris in their just struggle for their inalienable right to self-determination.

The prime minister further added that the issue of IoK was an internationally recognised dispute, the resolution of which was firmly anchored in the relevant UN Security Council (UNSC) Resolutions.

He said the human rights situation in IoK had continued to worsen following India’s illegal and unilateral actions in August 2019.

“The inhuman military siege, which has remained in place for almost two and a half years now, has resulted in the martyrdom of hundreds of Kashmiris,” he underlined.

The premier said the Indian occupation forces continued to use brute force indiscriminately against Kashmiri men, women, children and the elderly.

“The Kashmiri youth have been particularly targeted in their campaign of unabated repression. The most oppressive illustrations of this are the use of pellet guns and destruction of entire neighbourhoods including collective punishments on communities in IoK,” he remarked.

Prime Minister Imran Khan was of the view that unending killing spree, arbitrary arrests of Kashmiris and human rights defenders, and refusal to hand over the mortal remains of martyrs by Indian occupation forces were a matter of grave concern for people across the world.

He said India had “unleashed the worst form of state-terrorism to break the will of the Kashmiri people and crush their legitimate struggle.”

“The whole Indian state machinery is involved in these unspeakable crimes against humanity. The over 900,000 Indian occupation forces continue to terrorise the Kashmiris through an assault on their distinct identity and culture through illegal demographic changes and economic marginalisation,” he said.

The premier said the Indian actions, aimed at converting the Muslim majority in IoK into a minority in their own land, were in violation of the UNSC resolutions and international law, including the 4th Geneva Convention.

He said the pattern of ongoing atrocities in IoK reflected the “anti-peace and anti-Muslim ‘Hindutva’ agenda of extremist RSS-BJP dispensation.”

India has not reciprocated Pakistan’s efforts for peace and stability. “Through its machinations, India has destabilised the entire region. India’s illegal and unilateral steps were rejected by Pakistan and the Kashmiris,” he reiterated.

He mentioned that durable peace, security and development in the region hinged on peaceful resolution of the Jammu and Kashmir dispute.

He concluded by saying that it is imperative that India let the Kashmiris exercise their right to self-determination through a free and impartial plebiscite under the auspices of the United Nations without further prevarication.