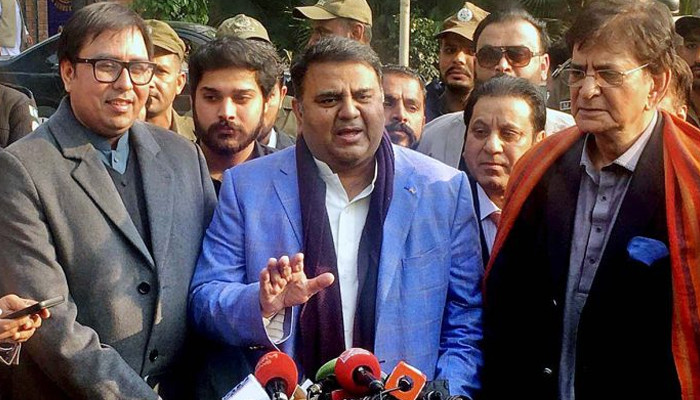 ISLAMABAD: Federal Minister for Information and Broadcasting Fawad Chaudhry said Thursday political parties such as PML-N and PPP were “only alive due to media coverage”.

Chaudhry, speaking to journalists along with Special Assistant to the Prime Minister on Political Communication Shahbaz Gill, took jibes at PML-N and PPP despite the PTI suffering a huge blow in the Khyber Pakhtunkhwa local body elections.

PML-N leader Maryam Nawaz, instead of celebrating the victory of other Opposition parties in KP LG elections, should express sympathy with her party’s losing candidates and motivate them after their sheer defeat in polls, he said.

“The PTI is still the largest political party at the village council level in KP,” he said.

Chaudhry said that political leaders like former president Asif Ali Zardari and ex-premier Nawaz Sharif had caused severe damage to the national economy through foreign debts, leaving the PTI government to pay off those loans.

He said Zardari used a wheelchair whenever he was supposed to appear before the court, attempting to show that he was suffering from serious diseases.

But after being granted bail by the court, he started “raising hollow slogans and making tall claims”, the federal minister said.

The information minister said PPP “did not have candidates” to contest elections in Punjab due to Zardari’s policies, which have made the party unpopular in the country.

Chaudhry said the sole purpose of such political parties was to “hatch negative propaganda over the issue of inflation”.

“These political leaders could not even go to Larkana and Nawab Shah due to their unpopularity, and they talk of wielding power in Islamabad and Lahore,” he added.

Nawaz and Zardari will now have to spend their lives in foreign countries, he said.

Chaudhry said previous governments did not build any new dams after Tarbela and Mangla, but the PTI government started working on constructing new dams, after which the water reservoirs “increased significantly”.

He said the PTI government focused on the development of the agriculture sector due to which five major crops yielded bumper production, adding that production of rice, wheat, and corn crops were historically high while the production of the cotton crop went up by 44%.

Chaudhry said Pakistan’s economic growth was moving “in the right direction” as the record purchase of motorcycles, agriculture pesticides, and vehicles were witnessed in the country.

He said $55 billion debt, taken by the previous governments, would have to be returned in the next five years.