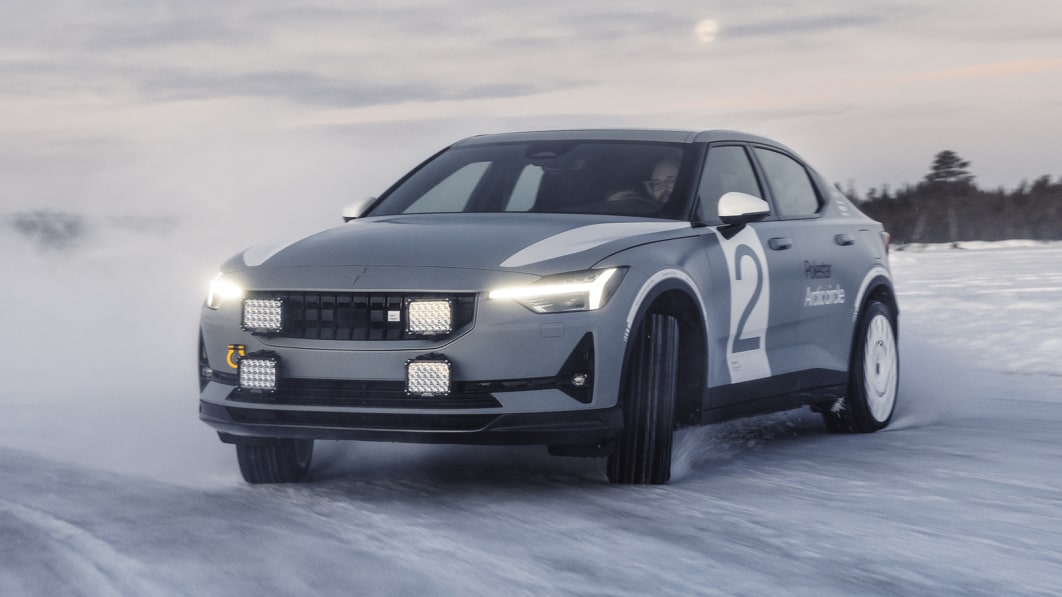 Polestar has been having quite a bit of fun probing the performance potential of the Polestar 2 electric sedan. Last summer, the company tuned up a 2 with major suspension upgrades and extra power. It even announced the power upgrade would be available to customers a few months later. The latest performance concept moves away from pavement to bring EV fun to the snow.

It’s called the Polestar 2 Arctic Circle, and it borrows heavily from the Goodwood prototype. It started as a Polestar 2 with the factory Performance Package. That would normally include four-piston Brembo front brake calipers, adjustable Ohlins shocks and 20-inch wheels with summer tires, but only the brakes remain from the package. Replacing the Performance Pack Ohlins shocks are even more impressive three-way adjustable units like the Goodwood prototype had, which have been set to a softer setting than a Polestar 2 Performance Pack would normally be adjusted. Unique springs that are 30% softer than the road model’s are also fitted, and the whole car has a 1.18-inch higher ride height.

The wheels and rubber are different, too. They’re 19-inch OZ Racing wheels with studded snow tires. The Arctic Circle concept gets a power boost, too, increased to 469 horsepower and 502 pound-feet of torque, the same numbers in the upcoming over-the-air upgrade. Polestar added other exterior upgrades to the car with a custom matte gray and white color scheme, a quartet of Stedi LED off-road lights and a carbon fiber front skid plate. Inside, the Arctic Circle features Recaro front seats, a recovery strap and a very fancy carbon fiber snow shovel.

Polestar explicitly said it has no plans to put the Arctic Circle into production. Still, we wonder if anything from it could become available in the future. Perhaps Polestar could release a special track variant of the 2 with that trick Ohlins suspension, along with a whole guidebook on how to set it up for different track conditions from pavement to snow. Maybe some new accessories could be made available, like those slick off-road lights. After all, they’re offering that power upgrade, who knows what else could come to reality.