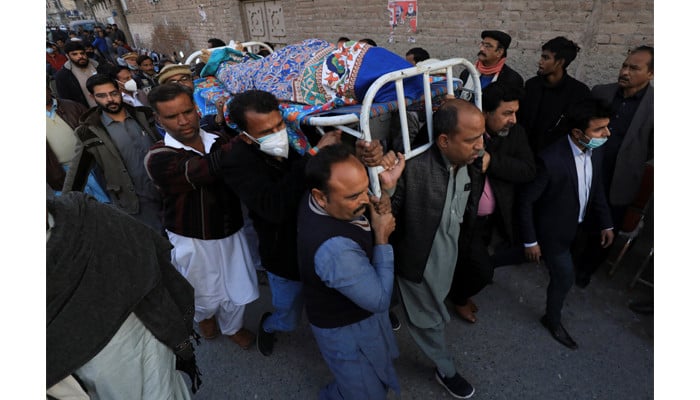 PESHAWAR: Police on Monday has launched a probe into the killing of a Christian priest — who was shot dead by unidentified attackers — in Peshawar, Geo News reported.

Per the report, the matter has been escalated and sent to the Counter Terrorism Department (CTD) after a section related to terrorism was added to the First Information Report (FIR).

The last rites of the priest — identified as William Siraj — were carried out on Sunday. His funeral was attended by Pakistan Tehreek-e-Insaaf’s MNA, Jamshed Thomas.

Talking about the incident, Thomas said that the investigation would be completed soon and those involved would be brought to justice.

As a protest against the incident, all the missionary schools in Peshawar remained closed on Monday (today).

Demanding an immediate inquiry into the matter, the Human Rights Commission of Pakistan (HRCP) has condemned the killing of the priest.

Special Representative to the Prime Minister on Religious and Interfaith Harmony Muhammad Tahir Mehmood Ashrafi addressed a joint press conference on Monday, along with the leadership of the Church of Pakistan and Bishop of Peshawar, and offered his condolences to the deceased.

Ashrafi said that the suspects will be caught soon as an investigation is underway.

He said that a Muslim scholar and a Christian priest were killed within two weeks, adding that mosques, churches, and imambargahs come under attack.

Ashrafi said that the enemies of the region do not want peace; however, these incidents cannot break the unity of the nation.

On the other hand, PML-N Vice-President Maryam Nawaz and PPP Chairman Bilawal Bhutto-Zardari offered their condolences to the bereaved families of the deceased priest

Bilawal questioned the authorities regarding the protection of religious minorities in Pakistan.

Meanwhile, Maryam Nawaz condemned the killing of priest Siraj and said that the incident is “agonising and questionable.”

She questioned if there is anything working well under the tenure of the incumbent government.

The PML-N vice-president asked about the equal rights that were promised to all the citizens of the country and said that political leaders should visit the families of the victim and console the Christian community.

A priest was shot dead and another injured in a targeted attack by armed motorcyclists in the limits of the Gulbahar Police Station, Peshawar, on Sunday.

Police said the priest left the local church in Gulbahar after Sunday mass along with Patrick Naeem and another priest when armed motorcyclists opened fire on their vehicle near the Ring Road.

William Siraj died after receiving multiple bullets while Patrick was slightly injured. The injured was taken to a hospital from where he was discharged later. Some reports said a third priest in the car remained unharmed. The attackers escaped after committing the crime.

Chief Minister of Khyber Pakhtunkhwa Mahmood Khan took notice of the targeted killing of the Christian community elder and directed the inspector general of police and others to arrest the killers at the earliest.