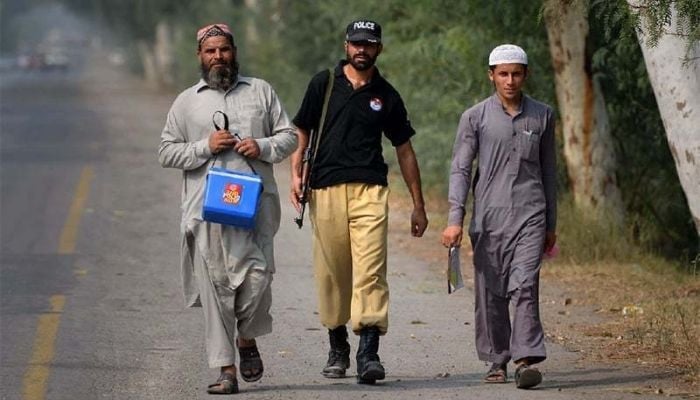 The incident took place in Tank, Dera Ismail Khan district of KP, when armed men on a motorcycle attacked the polio security team, killing one security official and injuring another.

The armed men fled the scene, and a police search operation to find them is underway, DPO Sajjad Ahmed told Geo News.

The body of the martyred security personnel and injured are being shifted to the hospital, the DHO stated.

On the other hand, the banned Tehreek-e-Taliban Pakistan (TTP) claimed that its fighters attacked the polio team in Tank.

Not the first time

Extremist groups often target polio teams and security assigned to protect them, claiming the vaccination campaigns are a conspiracy to sterilise children.

In August, constable Dilawar Khan was on his way to polio duty in Dera Ismail Khan when unidentified assailants opened fire on him near the Atal Sharif area of ​​Kalachi Tehsil, killing him on the spot while the accused fled, police had reported.

In a second attack in the month of August, a Frontier Reserve Police officer was shot dead by unidentified persons in Peshawar within the limits of the Daudzai police station.

The WHO deemed Pakistan and Afghanistan as dangerous countries in a recent statement by the Thirtieth Polio IHR Emergency Committee, stating that the two countries have failed to eradicate polio fully and may be responsible for the virus’s global spread.

Pakistan, on the other hand, has made remarkable strides against polio, as the incidence of Wild Polio Virus (WPV1) cases has decreased to zero in the previous ten months, down from 84 reported cases in 2020.

The Committee observed that Pakistan’s primary problem continues to be the ‘persistently overlooked children’ in core reservoirs, as well as dealing with parental refusals and troubling polio vaccination programmes in sensitive areas.