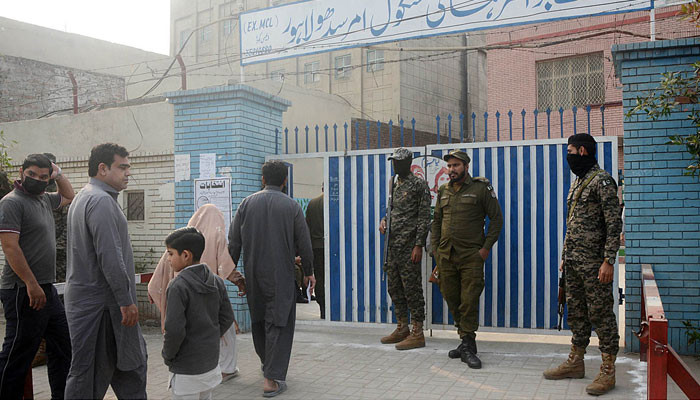 The time to cast votes in the NA-133 Lahore by-election has come to end and the counting of votes has begun across the 254 polling stations in the constituency, considered a “stronghold” of the PML-N, where it looks to retain the seat.

The polling started at 8am this morning and continued till 5pm without any break after which the gates to the polling stations were closed off to any more voters.

According to Geo News, amid the chilly weather in Lahore, the voter turnout for the by-poll remained rather lacklustre.

Polling stations saw a vote or two cast in the morning hours which increased to a few more by the afternoon. When time for polling to end began to draw close, voter participation improved slightly.

Brief overview of the NA-133 constituency

The NA-133 seat fell vacant after the death of PML-N MNA Pervaiz Malik who died of heart complications on October 11.

There were 11 candidates contesting the polls, including the former seat holder’s widow, Shaista Pervaiz Malik, and PPP’s Aslam Gill.

The PPP actively campaigned for the NA-133 by-election in Lahore, which is considered a stronghold of the rival PML-N, in the hopes of reviving the party in Punjab.

After the Election Commission of Pakistan rejected the nomination papers of PTI candidate Jamshed Iqbal Cheema and his covering candidate, his wife Mussarat Cheema, no PTI candidate is in the race.

PTI ‘will vote for no one’

PTI Central Punjab President Ijaz Chaudhry, in a conversation with Geo News, said that since his party has no candidate in the field, “we will not vote for anyone”.

“Today’s election is a black spot in the name of the electoral process,” he said.

He claimed that less than 20% of the total votes will be cast today.

“We have appealed to party voters to stay at home and not exercise their right to vote today,” he said.

Later, in a statement on Twitter, Senator Faisal Javed Khan said if PTI had been in the race, “voters would have thronged to the polling stations”.

“Being out of the race on a technicality is unfortunate,” he remarked.

He said that the spirit and enthusiasm displayed by PTI workers is always commendable.

“With a lack of interest shown by people, the situation the PML-N and PPP are in is obvious,” the PTI senator said.

‘PPP only party that can alleviate people’s suffering’

PPP President Punjab Raja Pervez Ashraf, in a message to the people of the constituency on the occasion, said: “Allah has given NA-133 voters a chance to decide their own destiny”.

“PPP is the only party that can alleviate the sufferings of the people,”  Ashraf said.

“Only PPP can end inflation, unemployment, lawlessness, uncertainty,” he added.

As the day progressed, news emerged that PML-N has set up a monitoring cell in the party secretariat in Model Town.

“The polling and general situation in the constituency is being monitored moment by moment,” Uzma Bukhari said.

The monitoring cell will continue its work till the announcement of the election results, she said.

Meanwhile, clear instructions were also given by the Election Commission of Pakistan (ECP) to all polling staff.

Ballot papers and other polling material were handed over to the presiding officers at the polling stations under the supervision of police and Rangers.

In case of non-availability of internet, the presiding officer should personally hand over the original Form 45 to the returning officer.

Earlier in the day, Chief Election Commissioner of Pakistan (CEC) Sikandar Sultan Raja inspected the distribution of polling material and expressed satisfaction over the arrangements.

CEC Raja said that all arrangements, including security, are complete. He urged voters of the constituency to exercise their right to vote.

The election commission said it has assigned security duties to law enforcement agencies, including police and Rangers.

The ECP said it has established a control room in the office of the returning officer, which would continue working throughout the polling process until results are compiled.

The ECP has also established separate control rooms at provincial and central levels to register and resolve complaints. The control room was to work from 7am in the morning till the compilation of results on polling day.

The central control room could be contacted on phone 051-9204402; Fax no 051-9204404 for registering complaints. The complaints could also be registered through Email:- [email protected]

A deputy commissioner and officers of police and Rangers will remain present to deal with any untoward incident.