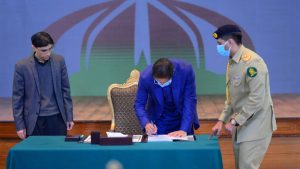 On Friday, Prime Minister Imran Khan launched the public version of Pakistan’s first-ever National Security Policy 2022-2026. He emphasised the importance of improving the country’s economy so that it does not need to approach the International Monetary Fund (IMF), whose conditions could jeopardise national security. In his remarks at the occasion, the Prime Minister praised the national security division and stated that the strategy has offered clarity to the country’s national security concerns. He paid tribute to the armed forces and said that the way Pakistan’s security forces tackled terrorism is remarkable. He further said that when the people become stakeholders of the country, it becomes the greatest national security. According to the PM, the country is now headed in the right direction.
PM Imran Khan blamed the previous government by saying that no efforts were made to bring economic stability to the country. He said that Pakistan has so much investment potential that the entire world could take advantage of it, however, unfortunately, the previous rulers have never given importance to promoting exports in the country.
According to the Prime Minister, the PTI government has been striving to serve people through a variety of programmes including universal health insurance, the Ehsaas Programme, a uniform national curriculum, and the fight for rule of law. He claimed that ten new dams are being built to assist assure water security.
The National Security Policy emphasises a geo-economic vision to supplement the focus on geostrategy and highlights that the foremost aim of Pakistan’s foreign policy and military capability was peace and stability in the region and beyond, based on mutual respect and sovereign equality. The NSP’s core topics include national cohesiveness, economic security, defence and territorial integrity, internal security, and foreign policy in a changing world. The policy aims to solve three important economic challenges which include external imbalance, socioeconomic inequality, and geographic gaps between Pakistan’s developed and underdeveloped regions. A just and peaceful resolution of the Jammu and Kashmir dispute in accordance with UNSC resolutions has been declared a vital security interest for the country. The original version of the policy will remain classified, but a public version of the document will be released.
The National Security Policy is unquestionably a move in the right direction. Governance, transparency, and the rule of law are all closely related to national security. Moreover, A strong foreign policy and political stability would pave the way to ensure the country’s security.

Previous articleNational Assembly Passes the Mini-Budget Amid Fierce Objections From the Opposition Benches
Next articleTesla to accept Dogecoin for merchandise, Musk says

Ukraine-Russia Crisis: Top US and Russian Diplomats See No Breakthrough At Their Ukraine Talks