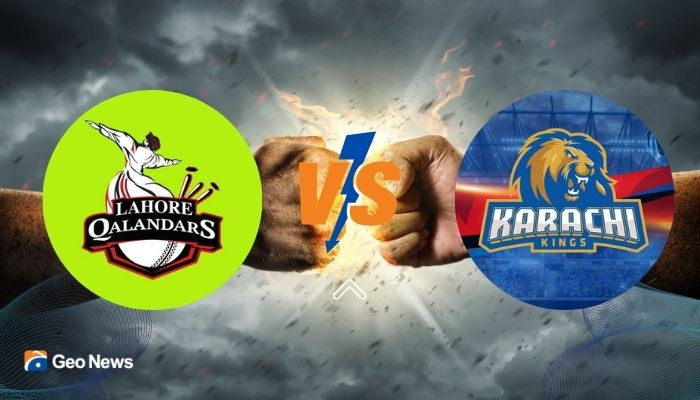 KARACHI: The Karachi Kings need to perform better in their third, but an important match against the Lahore Qalandars in the Pakistan Super League (PSL) 2022, scheduled to take place at 7:30 pm at the National Stadium today (Sunday).

The Kings have been unlucky this season of the PSL as they were downed by Multan Sultans and Quetta Gladiators in both their first and second clashes. Hence, claiming the victory in the third match has become crucial for the squad.

Karachi Kings expect a major contribution from their captain, Babar Azam, who failed to score big in the first match, while the team collectively failed to deliver in both batting and bowling.

Sharjeel Khan (43) was the only batter to score the highest in the match.

However, the squad still has hopes skipper Babar will lead them to success against Lahore Qalandars, who have played only a single match this season so far, which they lost against PSL defenders Multan Sultans.

It will be seen whether Mohammad Amir plays or not. Amir also missed Saturday’s match against Quetta. He has the ability to spearhead Kings bowling which also carries Mohammad Imran, Aamer Yamin, Umaid Asif, Mohammad Ilyas and Lewis Gregory.

Meanwhile, Lahore Qalandars lost their opener against Multan Sultans after a tight clash on Saturday. Chasing 207, Multan needed 16 off the last over from Haris Rauf but Khushdil Shah, who came into bat after Sohaib Maqsood lost his wicket at a crucial stage, did a fine job, hitting Haris for three successive fours and then hit the right-armer for a fine six off his fourth delivery to bring in a thrilling win.

Lahore showed some class in their batting. Fakhar Zaman was fantastic. He smashed 76. He was ably backed by Dir Upper-born Kamran Ghulam with a solid 43. Rashid Khan (17*) and David Wiese (13*) did their job to take Lahore past 200. The tracks have so far not helped pacemen.

On Saturday Lahore’s bowlers were a bit wayward and they will need to keep a tight line and length with plenty of variation if they are to contain the batsmen.

Richard Illingworth and Michael Gough will supervise the match.