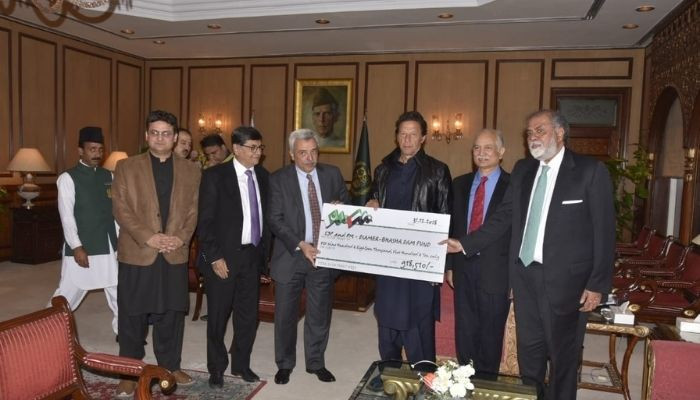 ISLAMABAD: The PTI received funding from an individual who owns an offshore company Dreshak Security Solutions Inc. The security firm claims it has provided around 15,000 specialised non-combat security personnel to the American forces in the Iraq war.

An investigation carried out by The News reveals that the PTI-led government in Khyber Pakhtunkhwa returned the ‘favour’ to its donor by awarding a multi-million dollars contract to build a luxury hotel in scenic and tourist destination Nathiagali in October 2021.

The Election Commission of Pakistan (ECP)’s scrutiny committee report reveals that Mumtaz Ahmed Muslim is one of the party donors who gifted $24,979 to the PTI.

Mumtaz Muslim is the president and owner of hotel chain and also owns Dreshak Security Solutions that provides security services in war zones. Mumtaz is not just a party donor but he also has close ties with PTI leadership.

On April 15, 2018, he met Imran Khan at his Banigala residence. After this meeting, Imran Khan decided to appoint him his special adviser. On April 26, 2018, the PTI chief signed a notification to appoint Mumtaz Muslim as a special adviser to the chairman on special projects on April 26, 2018. Mumtaz’s name also appeared in the media as a PTI leader when the FIA released a list of Pakistanis who own properties in the UAE.

Recently, the PTI social networking website posted a tweet about signing an agreement between the Khyber Pakhtunkhwa government and his hotel chain for setting up a luxury hotel in scenic Nathiagali.

Interestingly, before the agreement was signed, Mumtaz Muslim held a meeting with Chief Minister Khyber Pakhtunkhwa, Mahmood Khan, on September 16, 2021. Almost a month later, the provincial government awarded the contract to Mumtaz Muslim and signed the agreement with his company on October 20, 2021.

A hotel business related website on the occasion of signing of the agreement for establishing a luxury hotel in Nathiagali quoted Mumtaz Muslim as owner and investor of the hotel.

Apart from the hotel business, Mumtaz Muslim has a well-established security related company based in the UAE. The company had provided manpower to guard the American forces combating in Iraq and later in Afghanistan to some extent.

According to Dreshak Security’s official website, the company was established to execute a multi-million dollar running contract, the security division was founded soon after the need for specialised non-combat security forces was felt in Iraq and Afghanistan. “We screened, recruited and deployed over 14,800 security guards from Uganda, Macedonia and Bosnia to Iraq to provide security to 36 US bases in Iraq.”

Federal Minister for Information and Broadcasting Fawad Chaudhry, while talking to The News, said he has no information about Mumtaz Muslim’s security company. About the hotel contract, he said Mumtaz Muslim won it in an open bidding.

When asked about Mumtaz Muslim’s meeting with Chief Minister KP a month prior to the contract awarding, he said as far as he knows, the KP government did not award the contract but the army did. Talking about his affiliation with Imran Khan, the information minister said Mumtaz Muslim is a staunch party supporter and a former party member.