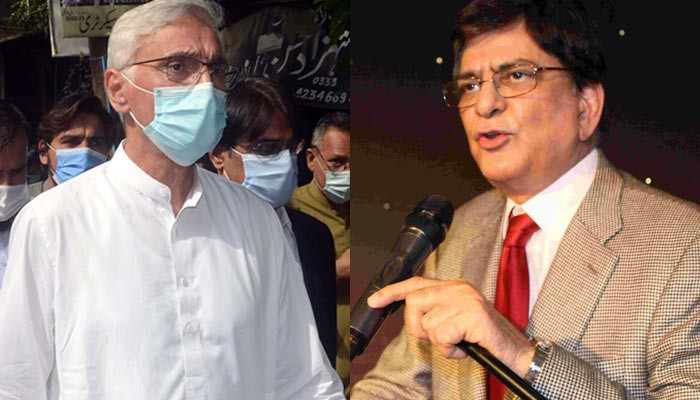 LONDON: PTI leader Jahangir Tareen launched a rebel group when he was asked to explain his income from the sugar industry, spokesperson for Prime Minister Imran Khan on Trade and Investment in the UK and Europe has claimed, The News reported Friday.

Sahibzada Jahangir said that thieves and dacoits rebel when PM Imran Khan tries to hold them accountable. “Thieves get bails from courts and return to live their normal lives.”

He was speaking at an event here organised by PTI UK leader Aneel Musarrat for Punjab Governor Chaudhary Sarwar at a restaurant where more than 400 guests were in attendance.

The PM’s adviser said that instead of explaining to the court how he had made money through his sugar mills, Tareen launched a rebel group within the PTI and threatened to bring down the government because he did not want to be held accountable.

He accused Tareen of being a “feudal lord”.

“Jahangir Khan Tareen was asked to approach the court in his sugar mills case and prove innocence but he didn’t do so. Instead, Jahangir Tareen formed a rebel group of 40 people.”

He also bracketed Tareen with those who “plunder and loot”.

“Looters are getting bails from the courts and are living in luxury. Edgware Road and Park Lane are full of Pakistani rulers. Dacoits and plunderers live there. Nawaz Sharif, Yourself Raza Gilani, and Asif Zardari are all living there. When Imran khan tries to do something, then there is a rebellion, there’s a clamour for revolt,” he said.

Jahangir asked PTI workers to not lose hearts and faith in PM Imran Khan and go out in public and tell the masses to be patient. He said the government was like a ship surrounded by stormy waters.

“Our ship is surrounded by a storm and it’s spinning but it’s our responsibility to save the ship. Our ministers and advisers took up flags and positions of the PTI, it’s their job to go out to their constituencies and explain the situation.” He also urged PM Imran Khan to reject loans from the IMF and Saudi Arabia.