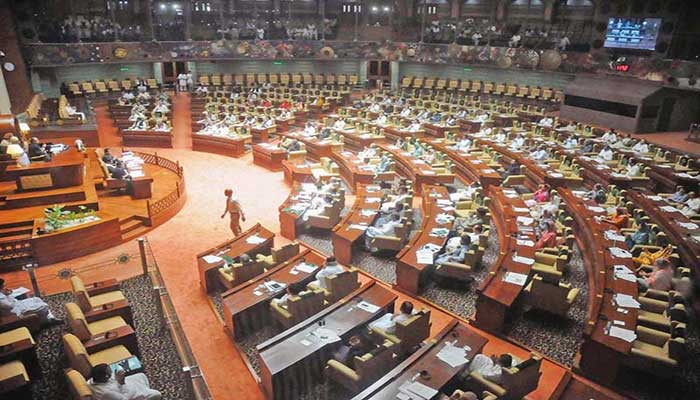 KARACHI: The Pakistan Tehreek-e-Insaf’s has filed a resolution in the Sindh Assembly against the allegedly-biased statement of Chief Minister Syed Murad Ali Shah.

The opposition lawmakers claimed in the resolution that the provincial chief executive had made a speech in the provincial assembly that was against the State of Pakistan.

Zaman said the Pakistan People’s Party (PPP) is in power in Sindh, so it is their responsibility to take the opposition into confidence. “The Sindh government should have talked to the opposition before bringing any law,” he told a news conference.

He said the provincial government has provoked the opposition to protest. He said that there have never been such protests in the Punjab and Khyber Pakhtunkhwa assemblies.The lawmaker claimed that today all democrats are against the PPP, not just political parties. He said the local govern ment amendment bill has been rejected by all the stakeholders. “Not only us but members of the Pakistan Democratic Movement have also declared it a black law,” he added.

He claimed that the Sindh government wanted to solve the problems of only PPP Chairman Bilawal Bhutto Zardari. “PPP leaders are becoming billionaires day-by-day, while Sindh’s children are dying of hunger and poverty in Thar,” said Zaman.

“Education and the health system have been destroyed. The only agenda of the PPP is to spread hatred. The PPP has become a cancer for Sindh.”

The PTI leader said Prime Minister Imran Khan has been asked to take constitutional steps for Sindh. “They will destroy Sindh before the elections. We have confidence in the prime minister’s team. We are confident that Pakistan will move forward,” he said.

“This thief can’t compete with Imran Khan. We are crying in Sindh. Our life has become difficult. We have realised that the people of Sindh want to get rid of them.”

Regarding the CM’s speech, Zaman said that it was very embarrassing. “The speech is an agenda to spread linguistic hatred in Sindh. Murad Ali Shah is making the historic resolution of Sindh controversial for his nefarious political purposes.”

Ghaffar, the PTI’s parliamentary party leader in the PA, also condemned the CM’s statement. “The chief minister says the opposition is ignorant, but we are not ignorant. We can expose the corruption of their government,” he said.