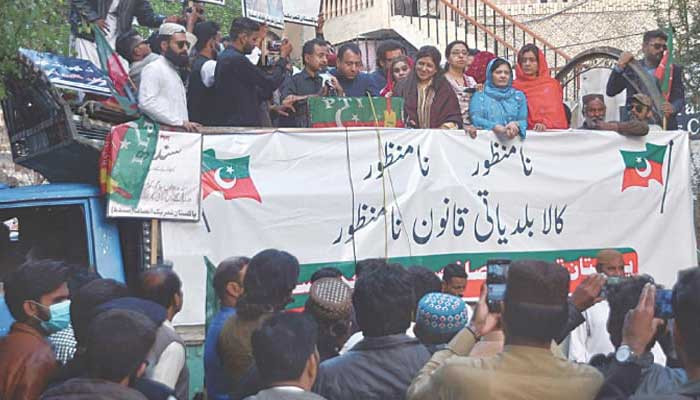 KARACHI: Pakistan Tehreek-e-Insaf Karachi Chapter on Monday announced to organise a protest outside the Sindh Assembly on Dec 19 against the Pakistan People’s Party-led Sindh government for approving the ‘controversial’ local government bill.

It was decided in a meeting of the PTI core committee and members of the National and Sindh Assemblies elected from Karachi at the Insaf House, the party’s secretariat in the city. PTI Karachi President and MPA Khurram Sher Zaman presided over the meeting.

The participants of the meeting decided to hold a large-scale protest outside the Sindh Assembly on December 19 at 12 noon to pressure the provincial government to “withdraw the bill and empower the local government system.”

They also decided to bring a resolution against the passage of the local government bill in the National Assembly. Addressing the participants, Sher Zaman said PTI will protest against the black law of the Sindh government. “We will not allow the law to disenfranchise local bodies under any circumstances,” he said.