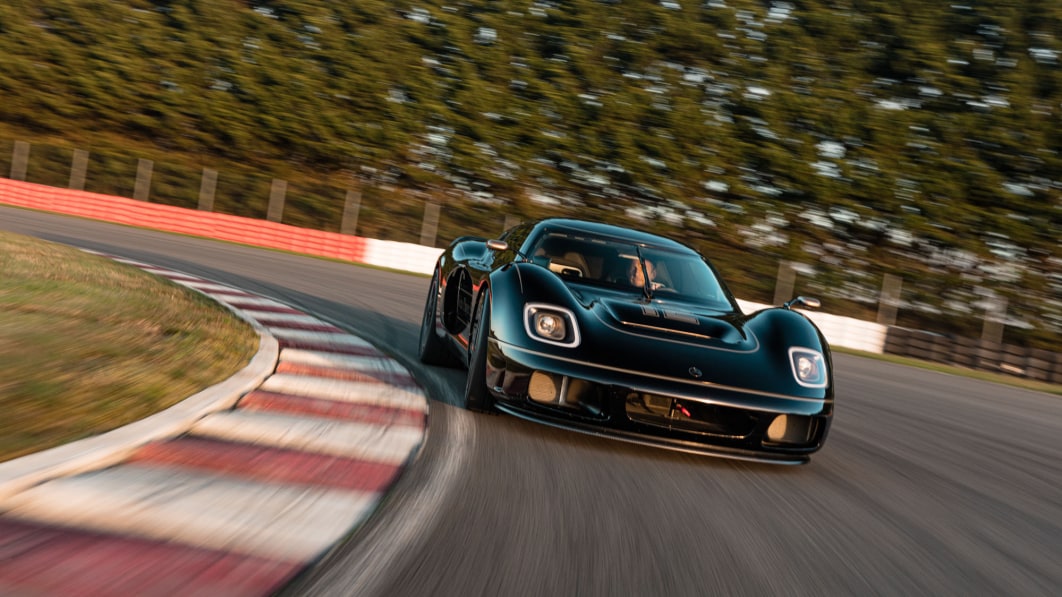 England-based coachbuilder Radford is one step closer to bringing the Lotus-based Type 62-2 to production. Formula One champion and company co-owner Jenson Button has finished putting a pre-production model through its paces on the Lotus test track in Hethel, England.

“To finally drive the Type 62-2 for the first time was obviously a very special moment, the cockpit already feels like home! The car felt great, well balanced in high- and low-speed corners, and it ran faultlessly all day. It’s the perfect base for the months of setup tweaking that will follow for me,” said Button in a statement. He added that the coupe was envisioned as a blend of Lotus performance and Radford luxury.

Clive Chapman, the managing director of the Classic Team Lotus and the son of Lotus founder Colin Chapman, attended the Type 62-2’s dynamic debut. And, the sub-2,200-pound coupe was joined by Emerson Fittipaldi’s Lotus 72 Formula One car for a few laps.

Button’s involvement in the project isn’t merely a marketing stunt. He owns part of Radford, which was recently revived after spending many years in the pantheon of automotive history, and he played a big role in developing the car. His involvement has seemingly paid off: Radford noted that, on the Hethel track, the Type 62-2 clocked a zero-to-62-mph time of 2.9 seconds and it reached 124 mph in 8.4 seconds.

This level of performance is provided by a 3.5-liter V6 that comes from the Toyota parts bin via the Lotus range. Mid-mounted, it’s fitted with a number of model-specific parts including the pistons, connecting rods, and camshafts, and it’s supercharged to approximately 600 horsepower in the range-topping John Player Special model that Button tested. It spins the rear wheels via a six-speed manual transmission.

Buyers will have two additional trim levels to choose from called Classic and Gold Leaf, respectively. The former puts about 430 horsepower under the driver’s right foot, while the latter is rated at around 500. Regardless of trim level, the Type 62-2 features a gorgeous interior with retro styling cues (including like a three-spoke steering wheel and Bremont instruments) and modern-day technology (like a phone dock).

Radford plans to build 62 units of the Type 62-2 and deliveries are scheduled to start during the second quarter of 2022. Pricing hasn’t been announced, but we know that every owner will be invited to participate in a one-day track event to learn more about their car from Button.