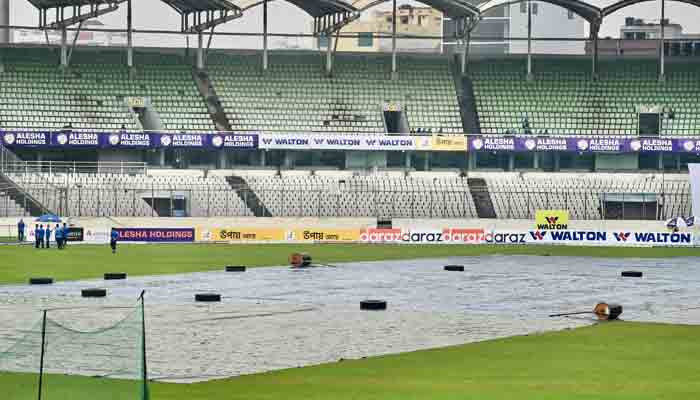 DHAKA: Play could not be resumed on Day 3 as the rain continued to pour in Dhaka and both the teams have been directed to stay at the hotel.

According to a statement issued by the Pakistan team spokesperson Monday, match officials will review the ground situation and decide about the start of play after which teams will depart for the stadium.

The second day was also called off early due to incessant rains as only 38 balls’ play was possible.

On Sunday, Pakistan added 27 runs to their overnight score to reach 188 for two against Bangladesh at the Sher-e-Bangla National Stadium in Mirpur.

After there was no play in the first session on the second day, play resumed following an early lunch and Pakistan began confidently and convincingly before rain halted play after 6.2 overs.

Shortly before rain ended the second day’s play, Azhar Ali hit back to back boundaries off Ebadot Hossain to complete his 34th 50 in his 91st Test. When day’s play was finally called off, Azhar was batting on 52 after beginning the day at 36.

Babar Azam, who was 60 overnight in Pakistan’s 161 for two, had started impressively with a boundary off the first ball of the day and was still at the crease on 71 with eight fours and a six.

The two batters have so far added 118 runs for the unfinished third wicket partnership.