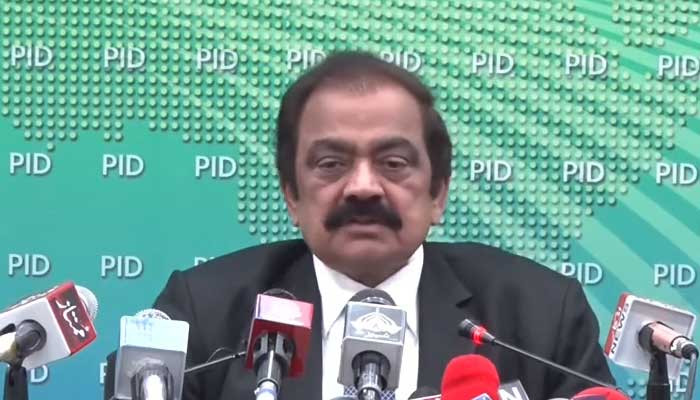 The PTI leader, earlier today, had alleged to have been subjected to custodial torture and stripping by two military officials.

The senator’s accusations were categorically rejected by the interior minister who said that the FIA did not hand him over to any other institutions and denied allegations of torture, alleging Swati and PTI of instigating mischief.

Swati was taken into custody by the Federal Investigation Agency (FIA) from his home in Islamabad on October 24. He was later presented before the senior civil judge Shabbir Bhatti’s court in the federal capital. Swati also filed a petition against his arrest in the Supreme Court.

“Imrani fitna’s characters have adopted the agenda of chaos to create riots and anarchy in the country,” he told journalists during a press conference, adding that they have been targeting the officers of the institutions for the past few days.

Commenting on the PTI leader’s custody by the agency, he said: “Azam Swati was in FIA’s custody. He was neither handed over to anyone else nor did anyone ask [for him to be handed over]. The case against him was filed by the FIA over a highly-objectionable tweet.”

“It is important to put facts before the nation, as they lie brazenly,” the minister said.

Sanaullah, flanked by FIA’s Deputy Director of Cybercrimes wing Ayaz Khan, added that the accusations are being made without any inquiry and without any application.

‘Hiding inside a drain’

FIA’s Khan, during the presser, revealed that the agency first introduced itself when raiding Swati’s home and the senator was sought outside through his servant.

“The servant said that Azam Swati was not at home. When the agency entered Azam Swati’s house, he was found hiding inside a drain and was laying on a mattress,” Khan said, adding that the FIA personnel waited outside Swati’s home for 40 minutes.

FIA’s Khan shared that after the PTI leader’s arrest, no one met him. He also added that the 75-year-old senator was not taken in front of his granddaughters.

Speaking on journalist Chaudhry Ghulam Hussain’s arrest by the FIA, the interior minister said that he was not familiar with his matter and assured against any kind of abuse on him.

Referring to his presser today, the interior minister said, “His useless talk does not even come within the ambit of the Constitution and ethics. He neither cares about his own respect nor that of others,” he said.

Sanaullah maintained that Swati committed “contempt of two institutions” in his Tweet, adding that the PTI leadership was “just hurling allegations and propagating [false information] against state institutions.”

Talking about PTI Chairman Imran Khan’s allegations regarding the torture and stripping of his party members including Swati and Shehbaz Gill, Sanaullah said that he doesn’t understand why Khan keeps repeating the same narrative.

“Imran Khan has adopted an anti-national agenda and instigates propaganda. He wants to take the country toward chaos and anarchy. His propaganda will be countered at all levels,” the minister said, adding that Khan considers him as a hurdle even though he hasn’t done anything to him.

He added that the PTI chief tried to threaten the government and made repeated speeches, but when all tactics failed, he finally resorted to holding a long march.

“Imran Khan wants to threaten [the government and institutions], but he has failed in this regard,” he said.

“He has committed to not enter the red zone,” Sanaullah said.

Commenting on investigations in the Arshad Sharif killing case, the interior minister shared that the probe team from Pakistan will reach Kenya today.

Speaking on the presser by the Director General Inter-Services Public Relations (ISPR) and the DG Inter-Services Intelligence, the minister said: “People are satisfied with yesterday’s press conference. How will Imran Khan’s threats affect me or the DG ISI.”