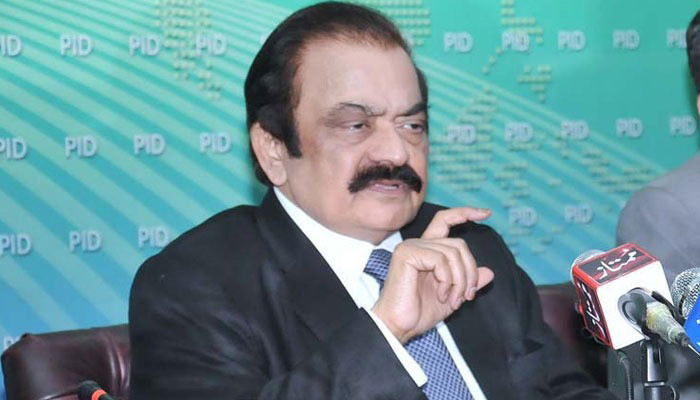 Federal Interior Minister Rana Sanaullah on Wednesday decided to consult journalists and other stakeholders regarding an amendment imposing seven-year imprisonment for those spreading hateful content on social media.

The minister said that if the amendment leads to restrictions on people’s freedom of expression, then the government will withdraw the bill.

“There are certain things on social media that need to be controlled,” Sanaullah said, adding that social media platforms are being used to harm people’s private lives.

He further added that the issue was an important one, therefore, the government is hoping that the amendments will not create hurdles in the way of people’s right to freedom of expression.

Sanaullah said that there will be a discussion in the Parliament related to the transfer of powers to the Federal Investigation Agency (FIA) related to the social media amendment.

Moving on to other matters, Sanaullah, while commenting on the PTI’s long march, said that the issue of party chief Imran Khan’s entry into Islamabad is under hearing in the court.

“If Khan provides assurance to the Islamabad High Court, that the march would remain peaceful, he will be allowed to come here.

When asked whether the government will negotiate despite PML-N supremo Nawaz Sharif’s prohibition to do so. In response, the interior minister said that “negotiations are always supported in politics and no politician ever says no to such offers. However, whenever we talk about holding negotiations, Khan resorts to hurling abuses.”

He also added that while talks are held with politicians, the same cannot be said in the case of Khan because he is a “political terrorist” and not a politician.

The federal cabinet on Wednesday approved an amendment imposing seven-year imprisonment for those spreading hateful content on social media.

Under the amendment, the FIA has been authorised to take action against such individuals.

The proposal has also recommended the inclusion of Section 505 of the Pakistan Penal Code in the FIA Act. Once the amendment is approved, FIA will also have the authority to take action on any kind of “fake news” and rumours on social media.

The cabinet approved the amendments in the FIA act through a summary moved via circulation. The final approval of the amendment will be taken by Parliament.