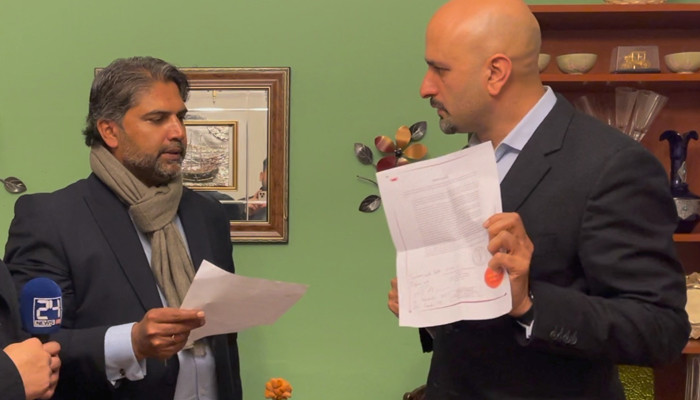 LONDON: Former chief justice of Gilgit-Baltistan Rana Shamim’s son and Supreme Court advocate, Ahmed Hassan Rana, has said that his father owns the affidavit he signed in London in which allegations of judicial manipulation were levelled against the former chief justice of Pakistan, Saqib Nisar.

Shamim, in the affidavit, had alleged that Nisar instructed another judge not to grant bails to PML-N leaders Nawaz Sharif and Maryam Nawaz until the 2018 general elections are over.

After arriving in London for vacations, Rana spoke to this correspondent and said that unfortunately, a section of media had “falsely reported that his father had distanced himself from his own affidavit.”

Rana said that his father is now aged 73 and he has hearing issues. “He never said that he doesn’t own his affidavit. There was confusion and misreporting from the courtroom. My father said that he has not read what’s published in The News‘ story. He said that he had not yet examined the leaked document; he didn’t say that he disowns his own affidavit.”

This scribe showed Rana the document that London Notary Public’s Charles Guthrie authenticated and confirmed to Geo News as the authentic paper that Shamim signed.

Rana then confirmed that his father stands by the full contents of the affidavit.

He said: “I have already confirmed the same in my interview with Shahzeb Khanzada and during interviews with other channels. This affidavit has the same content that my father had signed.”

Rana spoke to this correspondent 48 hours after the London Oath Commissioner confirmed that the affidavit published in The News was genuine and that Shamim met him to sign the paper alone and was in his senses.

Asked to comment on the signature on the affidavit published in The News, advocate Rana said: “I have seen the document and [they] are my father’s signature. I can confirm. I have said all along that it’s a genuine document.”

Rana said that his father informed him that he had “executed” the affidavit in London and that there is a court case.

“I suggested to my father he should have told me beforehand.”

Commenting on his father’s version that his late wife asked him and the former senior judge to bring on record the alleged judicial manipulation by former Nisar, Rana said his mother was a “pious and religious woman who feared only Allah”.

He said his mother was saddened when she witnessed Nisar, during the 2018 visit to Gilgit Baltistan, passing instructions to keep Maryam and Nawaz in jail at any cost before the 2018 election.

He said: “My mother regretted that this was happening in Pakistan. She was not associated with any political party. She repeated the saying of Hazrat Ali (AS) that a society can survive with kufr (infidelity), but not injustice. Injustice is wrong, be it Zulfikar Ali Bhutto or Nawaz Sharif. Injustice doesn’t work.”

“Both Bhutto and Nawaz are relevant today. We have to stop creating political martyrs (through judicial manipulations). Run the proper legal proceedings and if there is a case punish them and discharge them, if there is no evidence, then executing them is unfair. Can you humiliate a prime minister in this country like that? You cannot. Let the court run the cases in their natural manner.”

The apex court lawyer said his mother, like him, had no political affiliations. However, she believed justice should be done if there has been injustice.

Rana said it was his personal view that due process and fairness were not followed in Nawaz’s case. “The case against him started with Panama. It ended at Iqama and Oxford dictionary definition was used to throw out a prime minister. With due respect to the court, this judgment (against Nawaz Sharif) will never be used as a precedent as Zulfikar Ali Bhutto’s judgment is not used as a precedent. Nobody meets the standards set in that judgment. It’s impossible. In my opinion, this was unfair.”

Agreeing with London Oath Commissioner Guthrie that Shamim was mentally fit, capable, and in his proper senses when he signed the affidavit to authenticate the contents, Rana said his father knew well the risks and consequences of what will happen when he signed the affidavit. He said his father is aware that he can go to jail if he cannot prove it. “He knew the risks. He’s a former chief justice and vice-chancellor of a university. It’s not an easy thing to do. There is circumstantial evidence and he stands by it. I am also a witness to this circumstantial evidence. I am a hearsay witness and I will confirm it in the court if there is a judicial inquiry.”

Rana said he will not be meeting Nawaz in London during his stay. “I will be staying in the UK for around ten days and then I will go to Karachi to attend my school reunion.”

Three days ago, the solicitor, oath commissioner, and notary public London Guthrie said he was prepared to appear before any court in Pakistan to confirm that Shamim signed the affidavit and was in his sense and under no pressure at the time of signing the document that was published in The News first by Ansar Abbasi.

Guthrie said that Shamim confirmed to him that he wanted to sign his affidavit, carrying claims that former Nisar exercised pressure on a senior judicial Islamabad High Court official to ensure that former Nawaz and his daughter Maryam are not given bails before the 2018 general elections.