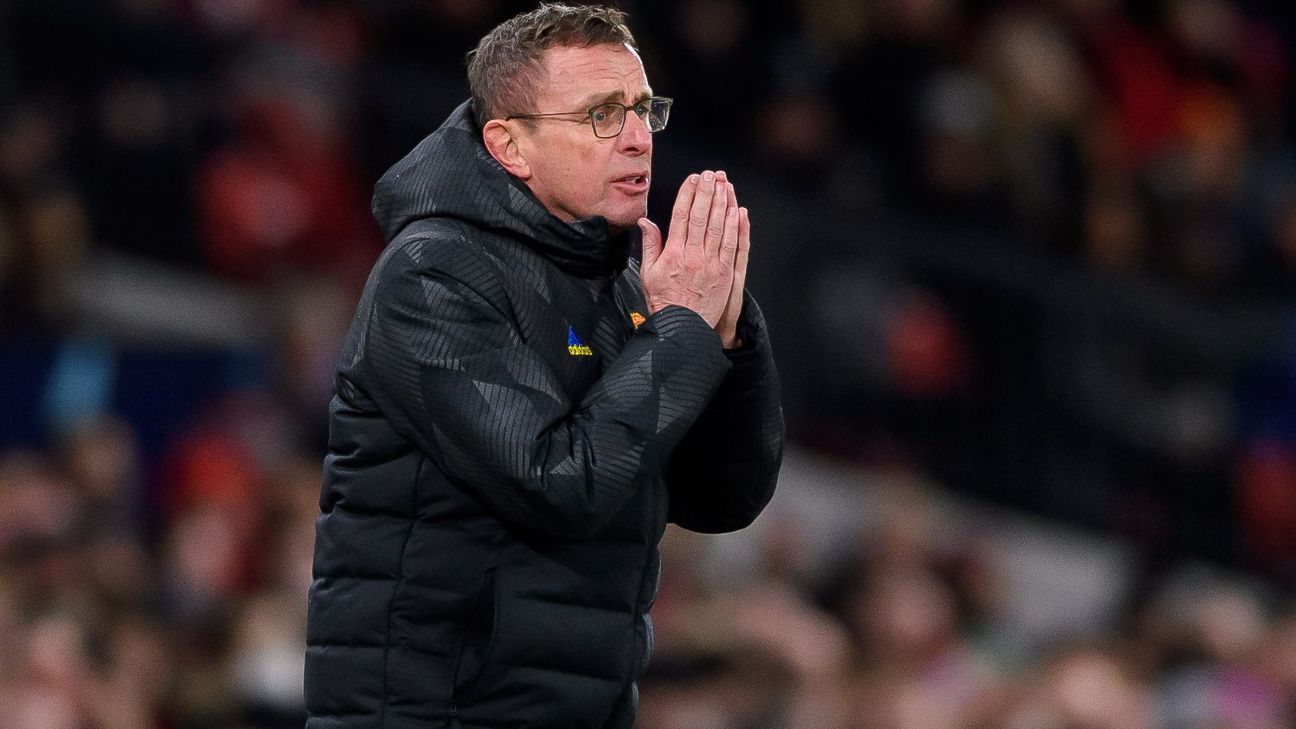 Speaking after the 1-0 defeat to Wolves on Monday night — Rangnick’s first loss as interim manager at Old Trafford — Luke Shaw said the team had not felt “together” on the pitch while also questioning their motivation and intensity during the game.

Sources told ESPN that although Rangnick was disappointed with the comments, Shaw’s interview did not come as a huge surprise and there are concerns that if the issues are not fixed, United’s hopes of securing Champions League football next season will fade quickly.

Rangnick has been in his post for a month and a number of players have said they want to leave. Sources said that fringe players who became frustrated at a lack of game time under former boss Ole Gunnar Solskjaer believed they were getting a clean slate under the 63-year-old but again feel under-used.

To make matters worse, players seeking moves away in January have been told they are likely to be kept until the end of the season. Only Anthony Martial remains confident of securing a transfer during the window.

Among those who have been picked, there are concerns about the suitability of Rangnick’s 4-2-2-2 system — particularly after poor performances in the 1-1 draw at Newcastle and the Wolves defeat. Sources said some players believe individual video sessions have led to disjointed displays because they are unsure about where teammates are supposed to be.

Privately, Rangnick has accepted that a lack of time together on the training pitch has been less than ideal while he attempts to get his ideas across.

United were forced to close their Carrington training base in December after an outbreak of COVID-19 but there is hope a clean bill of health and a less hectic schedule in January will help Rangnick rectify the situation.

Sources added that Rangnick has turned to assistant Mike Phelan to repair divisions in the dressing room. Rangnick has appointed Chris Armas, Sascha Lense and Ewan Sharp to his coaching staff but sources have told ESPN the departure of Michael Carrick, who quit the club in the wake of Rangnick’s appointment, is still being keenly felt within the squad leading to a disconnect between players and management. — Rob Dawson

Following confirmation that Ed Woodward will leave his post as executive vice-chairman at Manchester United later this month, ESPN has been told that one of his biggest regrets is that he was unable to take Harry Kane from Tottenham to Old Trafford.

Sources told ESPN that, as the outstanding English centre-forward of his generation, Kane has always been regarded as a prime target for United should he ever become available.

– Ogden: Why United failed under Woodward

United’s frustration, sources said, is that Tottenham chairman Daniel Levy has always been one step ahead of interested clubs and Kane himself by ensuring the England captain was given contract extensions at crucial stages to avoid him entering the final two years of his agreements with the club.

Levy persuaded Kane to sign a six-year contract in 2018 — a deal which enabled Spurs to hold out for £150 million for the player when Manchester City tried, and failed, to sign him last summer.

Kane’s future at Spurs remains a subject of intense speculation, especially with the 28-year-old about to enter the final two years of his contract and therefore able to exploit the diminishing length of his deal to his advantage.

And although sources said that United have a number of areas to address in their squad, the age profile of their attacking options — Cristiano Ronaldo is 37 on Feb. 5 and Edinson Cavani will be 35 nine days later — means they will be active if a top-class centre-forward becomes available this summer. — Mark Ogden

Gab and Juls debate whether Harry Kane would have been a good signing for Man United.

Benzema shirt a hit with Alcoyano

The Spanish giants contacted Alcoyano — who play in the Primera RFEF, the third tier of Spanish football — ahead of Wednesday’s match, asking which Madrid player’s shirt each member of their squad would like to receive as a memento.

LaLiga topscorer Karim Benzema was the overwhelming favourite, with the vast majority of the Alcoyano players asking to be given one of his No. 9 jerseys. Madrid’s gesture meant all of them got their wish, with no need for arguments — or the drawing of lots — to decide who would get to take home Benzema’s shirt.

It’s the second year in a row that Madrid have made such an offer, repeating the gesture from a year ago when Alcoyano also hosted Madrid in the cup at the same stage. On that occasion the hosts pulled off a historic giant-killing upset, beating the Spanish champions 2-1 after extra time on January 20, 2021.

Benzema’s shirt was also among the most requested last year, alongside the equally popular Luka Modric and then-captain Sergio Ramos.

The France forward himself missed Wednesday’s game with a knock, as did Modric. Their absence didn’t prevent Madrid from avoiding another slip-up, recording a hard-fought 3-1 win thanks to goals from Eder Militao, Marco Asensio and Isco. — Alex Kirkland

A raft of Tottenham players are fearing for their futures as Antonio Conte plans a ruthless overhaul of the squad with more than half a dozen players at risk of being sold, sources told ESPN.

The Italian delivered a scathing assessment of the group in the aftermath of Wednesday’s Carabao Cup semifinal, first leg defeat at Chelsea, claiming “we are a team in the middle” and nowhere near ready to compete at the top end of the Premier League.

Sources told ESPN that view has been replicated in private meetings Conte has held with senior figures at the club in mapping out how to reshape his squad, a strategy which centres on a major overhaul taking place.

It is understood that Dele Alli, Steven Bergwijn, Matt Doherty and Tanguy Ndombele are among the list of players Conte is willing to part with. There is also some uncertainty over Japhet Tanganga and Giovani Lo Celso among others.

Chairman Daniel Levy is expected to back Conte’s judgement and the process will begin this month if possible but senior figures at the club recognise the difficulty of doing significant business in mid-season.

Sources claim this is one of the reasons why Conte is publicly calling for time and patience as he looks to turn Spurs into title challengers.

Another issue is the availability of potential signings. Sources told ESPN that Conte is keen on strengthening a variety of positions — a centre-back, a wing-back, a midfielder and a back-up striker for Harry Kane among them. The club are actively pursuing targets but will not rush into compromises this month. — James Olley

Red card romance in the Netherlands

Receiving a red card during a narrow defeat usually leads to players being angry at the officials, but for FC Emmen left-back Jeff Harveld it was a different story altogether.

Harveld recently announced on social media he has started a relationship with Shona Shukrula — the fourth official from a match which saw him sent off.

Shukrula was part of the officiating team when FC Emmen slumped to 1-0 home defeat against FC Eindhoven in their Dutch second tier match on Aug. 13, a match which saw Harveld red carded in stoppage time.

However, far from being a disappointing afternoon for Hardveld, it became a life-changing day as he was introduced to Shukrula.

And, on Jan. 2, the 26-year-old Hardveld posted a series of pictures with Shukrula in Rome over New Year along with the caption: “It’s official.”

Head of Dutch referees Dick van Egmond said he supported the relationship and told reporters: “We are aware of their relationship. For us there is no problem.”

Asked whether it could pose a problem in the future, Van Egmond replied: “Shona Shukrula will not be assigned to matches where Jeff Hardveld will be playing.”

Hardeveld started his career at Feyenoord’s youth ranks before joining Utrecht and Heracles and moved to Emmen in the summer of 2021. He has also represented the Netherlands in unider-21 tournaments. Shukrula has been a FIFA referee since 2017. –– Andrew Cesare Richardson