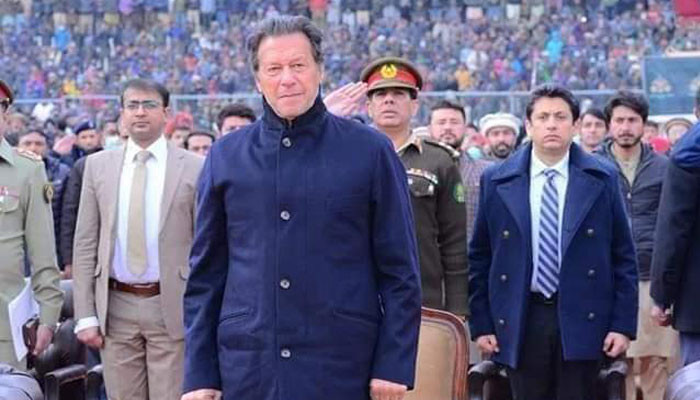 SKARDU: Prime Minister Imran Khan on Thursday said with improved road connectivity and the Skardu International Airport, Gilgit-Baltistan (GB) was about to turn into a top destination for local and foreign tourists, ensuring economic prosperity.

“The people of GB will soon witness an unprecedented era of economic prosperity with revenue generation through tourism and employment opportunities,” he said in his address to locals here at a jam-packed Municipal Stadium.

He said his government had taken a number of steps for the development of the masses and expressed the desire that he wanted a major improvement in the lives of underprivileged on completion of his tenure.

He mentioned that from today (Thursday) onwards, the government had initiated the provision of ration on subsidised rates. Also, the work on expanding the network of universal health insurance of Rs0.1 million for every household was underway after its launch in Khyber Pakhtunkhwa.

The prime minister, who earlier inaugurated the Skardu International Airport and the Jaglot-Skardu strategic road, said the significant pieces of infrastructure would boost tourism in the region.

He said the initiative would promote both summer and winter tourism in GB and attract a big influx and announced to establish luxury resorts to attract more foreign tourists. The premier said he had widely traveled the world over but never seen a splendid mountainous range like of Gilgit-Baltistan.

“If Switzerland can annually earn $70 billion revenue, the GB has the natural resources to exploit its potential,” he said. He said Pakistan could earn billions from tourism, may it from the scenic northern areas or the diversity of religious tourism.

He, however, cautioned the locals to safeguard their interests as outsiders would be eying their property and land in view of the area’s tourism potential. Imran Khan lauded National Highway Authority (NHA) and Frontier Works Organisation for working relentlessly in improving roads connectivity across GB.

He said connecting GB with Azad Kashmir through roads would also bring improvement in the lives of locals. He said hydroelectricity projects have been set up in GB to meet the water requirements.

Imran Khan said a country could not progress unless it uplifted its neglected and unprivileged segments of the society. He said he was prioritising the development of the areas that lacked facilities of communications and health, including Gilgit-Baltistan, Balochistan, erstwhile tribal areas, and Southern Punjab.

“My vision of a prosper Pakistan is inclusive development that caters to the needs of poor and weak,” he added. He said a society was known for its socio-economic justice where poor and rich had access to basic facilities of life.

Our correspondent adds from Islamabad: The prime minister, meanwhile, reiterated “we will never let down the survivors and parents of our martyred children, as there is zero tolerance for violence and those using it as a tool”. In a tweet to mark the tragedy of December 16, 2014, Prime Minister wrote, “Dec 16, 2014, terrorists attacked and martyred over 140 people including 132 children in APS, Peshawar. Pakistan has successfully defeated terrorism.

“I reiterate that we will never let down the survivors and parents of our martyred children. There is zero tolerance for violence and those using it as a tool”. Meanwhile, in his message on the Army Public School tragedy, PM Imran said, “Today, the entire Pakistani nation is reminded of this agonizing tragedy when cowardly evil elements attacked and martyred the future of our nation, the unarmed minors.

“Today it is a reminder of those brave Army Public School teachers who stood like an iron wall in front of the enemy to protect their students and laid down their lives”. He continued, “Time has proved that although terrorism has no religion or nation, there is a cowardly thinking behind it which can use even the youngest puppets to carry out its nefarious political ambitions. The sacrifices of the martyrs of the Army Public School were not in vain. After this tragedy, the morale of the brave Pakistani nation rose higher against terrorism instead of declining. The whole nation was united and under the National Action Plan; we targeted the enemies in their hideouts.

“Today, I assure the entire nation that the enemy can never demoralise the Pakistani nation. Whenever the evil elements tried to shake the greatness, courage and fortitude of the Pakistani nation, they were defeated. Let us pledge today that the whole nation will stand united and stand against those who spread sectarian, religious and ethnic prejudices, those who spread separatism and those who use such tactics to fulfil their nefarious political ambitions.

“By identifying these existing elements, the state will assist in their redress. I pray to God to elevate the ranks of the martyrs of the Army Public School and grant patience to their families. Quaid-e-Azam says that there is no power in the world that can harm Pakistan. Long live Pakistan”.