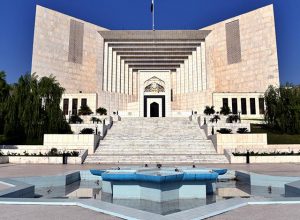 The Supreme Court has announced that the election for the Punjab chief minister slot will be held on July 22 after the rival parties — PML-N, PML-Q, and PTI — reached a consensus on the matter.
Punjab CM Hamza Shehbaz and Speaker Pervaiz Elahi, who appeared before the top court via video link on Friday gave consent to one of the options the apex court had given them.

The orders came after day-long deliberation on how to move forward following the Lahore High Court’s (LHC) decision to recount the votes polled during the April 16 election for the post of the provincial chief executive. The LHC had ruled to re-count the votes excluding those polled by 25 PTI dissidents.

The PTI has challenged the LHC’s decision, calling it ‘flawed’.
All the parties agreed that Hamza would remain the chief minister till July 17.
“All parties have agreed to hold the election of the chief minister on July 22,” Chief Justice Umar Ata Bandial remarked while concluding the hearing on the case. The apex court said that a detailed verdict of the case will be issued by tonight.