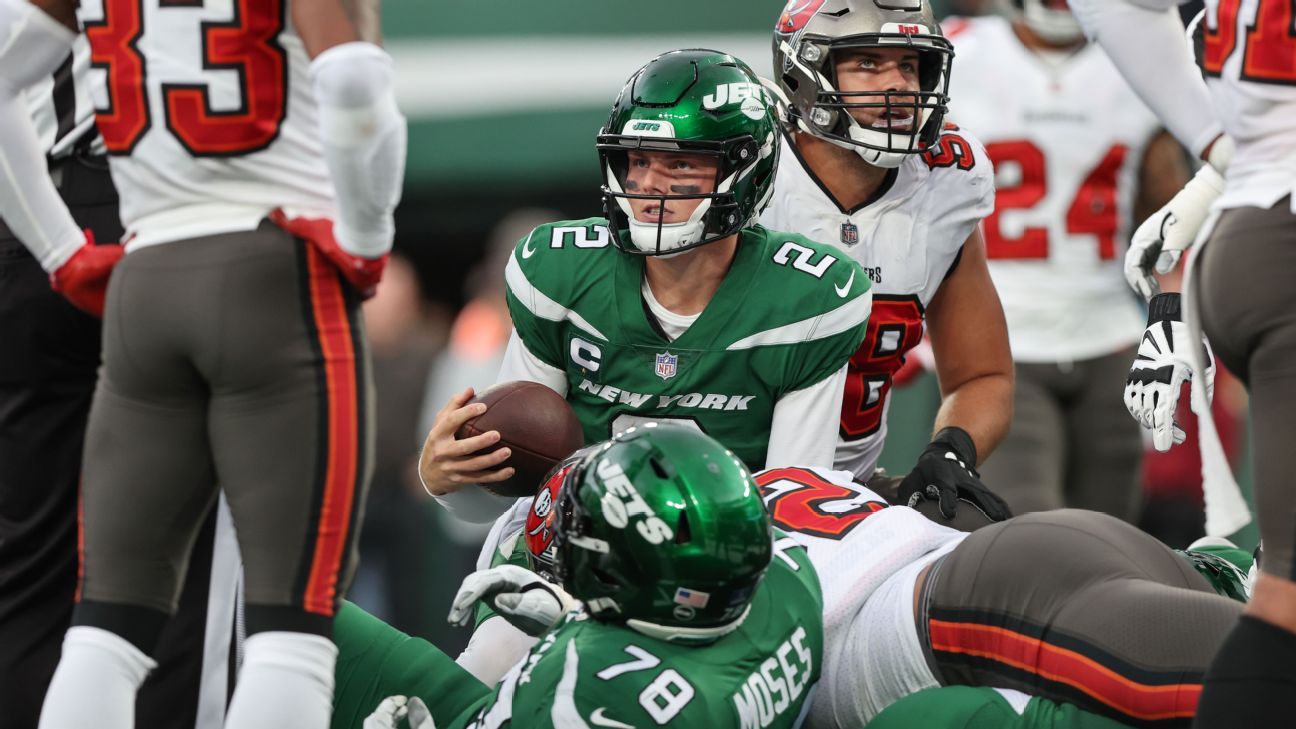 EAST RUTHERFORD, N.J. — Two yards away from one of the biggest upsets in franchise history, the New York Jets gave the wrong play to quarterback Zach Wilson on a pivotal fourth-and-2 late in a 28-24 loss to the Tampa Bay Buccaneers on Sunday at MetLife Stadium.

Coach Robert Saleh said the outcome “makes you sick,” saying Wilson should’ve handed the ball to wide receiver Braxton Berrios on an end around instead of running a quarterback sneak — which was stuffed for no gain at the Bucs’ 7-yard line with 2:12 left in the fourth quarter. The Jets, ahead 24-20, could’ve run out the clock with a first down.

Saleh blamed the coaching staff, and although he didn’t mention any names, his ire was directed at offensive coordinator Mike LaFleur. Saleh called it a communications breakdown, saying Wilson never should’ve been given the option of sneaking in that situation.

“They deserved better,” Saleh said of his players. “We won that game, and we’ve got to be better for our players.”

“In that situation, we wanted the ball handed off to Berrios, but we did a very poor job as a coaching staff communicating that in the huddle,” he said. “Zach executed the play the way it was designed. Unfortunately, if you look at the TV [replay], Braxton probably has a first down and the game is over.”

The Jets (4-12) actually took a timeout before the play to talk it over, which made a miscommunication unforgivable. LaFleur, who was in the coaches booth, wasn’t available after the game.

“It’s Mike to Zach,” Saleh said of the communication. “It’s simple: He calls a play and says, ‘Hand this ball off no matter what.’ That’s all the communication that needs to be said. It never got across. Zach executed the playbook as designed.”

Berrios, a dangerous runner, came in motion, right to left. The Bucs were bunched at the line of scrimmage. Chances are, he would’ve picked up the first down, perhaps a touchdown, if Wilson had given him the ball.

The Jets ran the same play earlier this season against the Houston Texans, with Wilson handing to wide receiver Elijah Moore on an end around from the Houston 15. But that was fourth-and-1, not fourth-and-2. It gained 7 yards.

Given new life, the Bucs capitalized, as quarterback Tom Brady — with no timeouts remaining — orchestrated a 93-yard touchdown drive, hitting Cyril Grayson for a 33-yard score with 15 seconds left. It was a crushing loss for the Jets, who blew a 24-10 lead in the third quarter.

Wilson, explaining what he saw on fourth-and-2, said he simply tried to execute what he was told.

“We got the play call and I liked it just because it has a bunch of different options,” Wilson said. “Right there, I was just thinking to do my job. We had an open A-gap there. Unfortunately, we came up short.”

Asked if he second-guessed his decision, Wilson said, “I did what I thought was necessary to do right there. That was in my parameters. Coach LaFleur understands that. The hard thing right here is, it’s easy to say, ‘Hey, I hand that off and we get the first down.’ OK, well, say it’s reversed. Say I handed that off and we get stuffed. Then everyone says, ‘Why didn’t you take the open A-gap?’ It goes both ways.”

Except Wilson (18-for-32, 224 yards) never should’ve been given the option, according to Saleh, who seemed upset.

“We’ve got to be better as a coaching staff in terms of communicating and making sure everything we want is exactly the way that it needs to be done,” Saleh said. “That’s a first down to Berrios and we’re talking about something completely different.”

The Jets could’ve taken a seven-point lead if they had opted for the field goal, but Saleh opted to make the gutsy call on fourth-and-2.

“We’re a yard away from keeping the ball out of the greatest player in the history of football’s hands,” Saleh said, explaining his choice, though the Jets were actually 2 yards away. “I’ll take that yard every time.”

The Jets, a 14.5-point underdog, nearly pulled off the biggest home upset in team history, based on the spread, per ESPN Stats & Information. Wilson played his best game, Berrios scored two touchdowns, and the Jets frustrated Brady (34-for-50, 410 yards, three touchdowns) for three quarters.

“When you have a team down by multiple touchdowns,” linebacker C.J. Mosley said, “you have to find a way to put them to bed.”