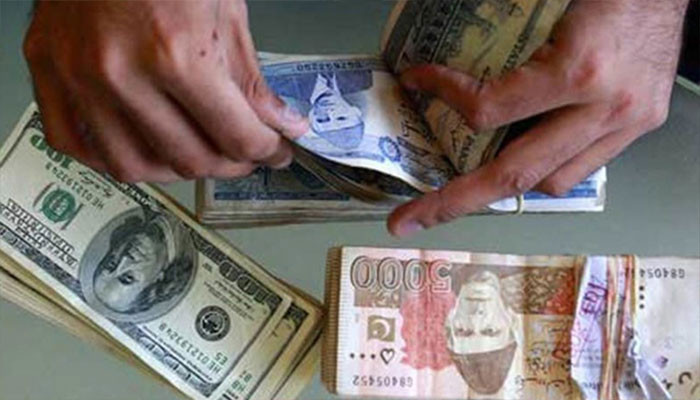 ISLAMABAD: The value of the Pakistani rupee has fallen by 30.5 percent against the US dollar over the last three years and four months under the government of Pakistan Tehreek-e-Insaf (PTI).

Many independent economists argue that this recent devaluation of the currency was dictated by the IMF through prior actions and it has nothing to do with macroeconomic fundamentals.

Dr Ashfaque Hassan Khan, a former economic adviser, said that there was a complete breakdown of economic policymaking as the country’s fiscal policy had become subservient to monetary and exchange rate policies. He said that the monetary tightening and exchange rate depreciation resulted in higher inflation, public debt and debt servicing. The empirical evidence showed that the one percent monetary tightening hiked the inflationary pressure by 1.3 percent in the case of Pakistan.

Experts say this massive devaluation of currency under the PTI government fueled inflationary pressures, adding that two major factors contributed to the price hike. First, the prices of food and commodities as well as fuel prices skyrocketed in the international market, and second, the depreciation of the exchange rate by 30.5 percent also led to higher inflation.

Some studies conducted by economists suggest that 10 percent devaluation of the currency raised the Consumer Price Index (CPI)-based inflation by 0.6 percent. As a result, the 30.5 percent depreciation resulted in increasing inflationary pressures by approximately two percent. This indicates that from the inflation standing at 11.5 percent on a monthly basis, nearly two percent comes through depreciation of the exchange rate.

An analysis of regional currencies versus the US dollar shows that the Pakistani currency experienced massive depreciation compared to others.

In the case of Bangladesh, the Bangladeshi Taka stood at 85.76 against the US dollar and it hovered around 84 to 85.9 on average over the last two years.

Meanwhile, the Pakistani rupee continued to fall in value and stood at Rs177 against a US dollar in December 2021. It depreciated sharply from Rs123 against to Rs177 against a dollar over the last three years and four months.

During the Musharraf-Shaukat Aziz regime between 1999 and 2007, the country’s currency remained largely stable and hovered around Rs60 against a US dollar. When the PPP-led regime came to power in 2008, the rupee depreciated as a result of a rising current account deficit and slid to Rs80 just in a few months.

The Pakistani rupee remained stable at Rs100 in August 2014 while it adjusted slightly and settled at Rs105 against the US dollar in 2015-16 and 2016-17. Then, former finance minister Miftah Ismail allowed adjustment of the rupee against the dollar and it nosedived to Rs118 against US dollar in June 2018.

The rupee continued to slide during the interim rule of a caretaker government. However, when the PTI-led regime joined the government in August 2018, the rupee stood at Rs123 against the US dollar.

Economist Dr Zafar Mahmood said that the increased foreign exchange reserves help countries to maneuver, but with limited reserves, there is less room a country to stabilise its currency. Pakistan needs to build up its foreign currency reserves with non-debt-creating inflows such as exports, remittances, and foreign investments.

Sajid Amin Javed, an economist from SDPI, said that the depreciation of the currency over the last three years had actually accumulated in the last eight years because the value of the rupee was artificially raised.

He said if data of the past decade was analysed, it would show that India and Bangladesh had allowed depreciation when it was required. If data from 2016 to 2018 was analysed, it would show that Pakistan’s current account deficit worsened but the rupee remained stable; while in India there was a lesser current account deficit but the Indian rupee depreciated from Rs63 to Rs71 against the US dollar.

He said Pakistan kept its rupee on the higher side and so accumulated depreciation occurred. He termed this phenomenon as “forced depreciation” as the foreign currency reserves depleted and the current account deficit widened. He said the events in Afghanistan also added pressure on Pakistan’s exchange rate.

Pakistan, he said, joined the IMF programme so it was left with no other option but to ensure implementation on the forced depreciation. “The main problem lies with our policies as it also triggers panic and uncertainty,” he added.