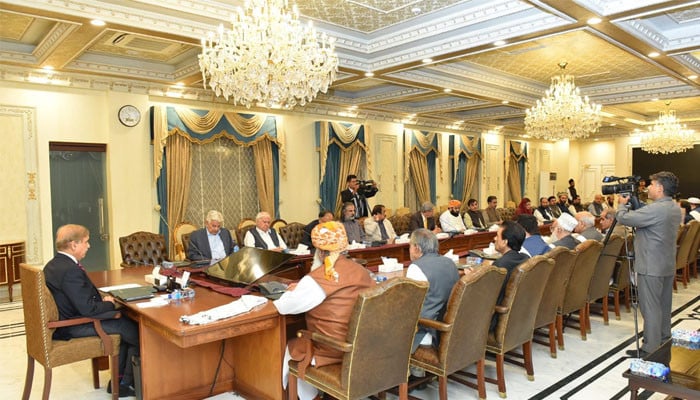 The ruling coalition Wednesday termed PTI Chairman Imran Khan a “traitor”, warned him against attacking Islamabad, and asked the governments of Punjab and Khyber Pakhtunkhwa to abstain from becoming a “tool” in paving the way for chaos in the country.

During a meeting of the coalition rulers at the Prime Minister’s House — chaired by Prime Minister Shehbaz Sharif — a discussion was held regarding the country’s political and economic conditions, including the situation on the interior and exterior front, a statement issued in this regard said.

During the meeting, the government expressed condolence over the deaths that occurred in the wake of the devastating floods and recited Fatiha for the departed souls. In addition, participants of the meeting said they were satisfied with the relief and rescue work being carried out for the flood victims in the country.

Participants of the meeting appreciated PM Shehbaz’s leadership skills and also commended the role of the federal and provincial governments in mitigating the effects of the devastating floods. They also lauded the efforts of the armed forces in helping the flood-hit people.

Shedding a light on the political milieu of the country, the coalition rulers decided that “no one would be allowed to attack Islamabad by crossing the limits of the Constitution and law.”

In an apparent reference to PTI Chairman Khan’s long march call towards the capital, the members of the meeting termed him a “traitor, conspirator and rioter” for “instigating state institutions to act against the Constitution.

“The one, who is inciting the institutions to act against the Constitution, wants to push the country into a serious crisis. Therefore, it is necessary to pull legal reins in on him as it is a constitutional demand,” the statement said.

Members of the meeting also expressed their deep concern over the matter of audio leaks and endorsed the cabinet’s decision to launch a probe into the matter of the diplomatic cypher.

The session under the PM chair also urged the Federal Investigation Agency (FIA) to urgently complete the probe against elements involved in serious crimes against the state and national interests.

During the meeting, newly appointed Finance Minister Ishaq Dar briefed the session on the country’s economic situation and talks being held with the International Monetary Fund (IMF).

Dar said due to the disastrous four-year economic policies of the previous government, none of the economic indicators showed positive signs.

“The debt of Rs20,000 billion taken during the previous government’s tenure had pushed the country to the verge of default,” he added.

The meeting expressed its satisfaction over the measures taken by Dar and appreciated his performance.

During the meeting, PM Shehbaz and coalition partners also decided to ensure a reduction in electricity prices.