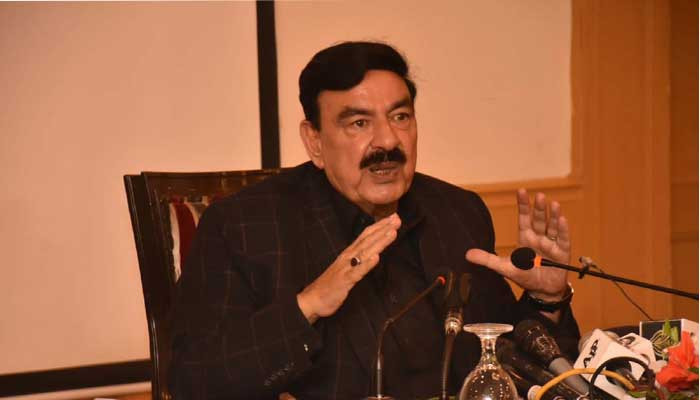 Speaking at a press conference here on Sunday, he said the national institutions make long term policies and not just for 20 days. He also said those policies did not belong to anyone in particular but are representative of the entire institution. The interior minister said Nawaz Sharif’s return to the country would not bring any change to the political set-up. He also asserted that Prime Minister Imran Khan is not going anywhere, and he will continue with his struggle against the corrupt political leadership till the very last. He said Nawaz Sharif’s family’s three members were already present in Pakistan and they were engaging in active politics here. The elder Sharif may also join them, but cannot effect any change. He said there is no denying the fact that ruling Pakistan Tehreek-e-Insaf had secured a sizable number of votes in the recently held local government elections in Khyber Pakhtunkhwa, despite losing LG seats.

Rashid offered PML-N supremo Nawaz Sharif to buy him an air ticket to let him come to Pakistan if he desired so. He also offered to arrange a visa for the former PM within 24 hours to facilitate his return to the country. Rashid recalled that Nawaz Sharif had left the country after staging a drama about his illness, but in reality there was no issue of his health as he did not consult any doctor in the UK. He said Nawaz Sharif, during his stay in the UK, did nothing except for issuing statements against the judiciary, the army leadership and to forge papers.

Answering a question related to the Leader of the Opposition in the National Assembly Shehbaz Sharif’s allegations of corruption against the PTI government, Sh Rashid said: “Your threats will not affect us in any way. You should look at your own conduct. No one else has been more corrupt than you and you cannot hold us accountable for anything.” He conceded that the mafia involved in sugar scam and similar others appeared stronger than the government as decisive action could not be taken against them. He said the ruling alliance had come to power after securing public mandate against the corrupt elements but it failed to nab them. But no one can charge PM Imran Khan with allegations of corruption, who will continue his campaign to root out corruption from the society.

Referring to the statement of former president Asif Ali Zardari that he would pitch a tent in Lahore, making it the central point of his political struggle, the interior minister reminded the former president that they [Zardari and him] have reached the fag ends of their lives and political careers. The minister said people know very well about the reality of Zardari and Nawaz Sharif and how they siphoned off the ill gotten money from the country.

Answering a question, he said no negotiations could be held with the London-based founder of MQM, Altaf Hussain, because of serious nature of criminal cases lodged against him involving terrorism and crimes against the state. Sheikh Rashid, however, said that he has good relations with other leaders of MQM in Pakistan.

He said he would soon visit the different districts and cities of Sindh including Sukkur and Ghotki to sort out problems related to NADRA and the issuance of computerised National Identity Cards. The interior minister announced he would dismiss from service all such officers who did not assume charge of postings under the new rotation policy of the government.

He also appealed to Sindh Chief Minister Murad Ali Shah to join hands with Centre for issuance of health insurance cards to the people of Sindh.